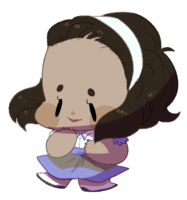 The daughter of a wealthy family... and a hobby naturalist (albeit, on the down low. Her father would not like to hear that she wastes her time studying natural history when he's not looking).

As promised, the rich man gave Taphao Gao along with half of this wealth to Krai Thong.

It's an old piece of folk lore... The king of crocodiles who stole a rich man's daughter and was slayed by a man named Krai Tong.
But what of Taphao Gao? The tale as told by man hardly has the interest of her and her sister in mind.
Lets take another look...into the tale of Krai Tong,the Crocodile King, and Gao's fate in it all.

Once upon a time, following the end of the second world war...

Thailand fell under the rule of a dictatorship. The country delved into a time of political upheaval and worrisome turbulance... But further away from the capitol, life continued mostly as it always had.
Taphao Gao was well past her seventeenth birthday, and comming upon her eighteenth when her fate was suddenly decided for her. She was to marry a rich man from Krungthep--not an unusual proposition. Gao had spent her whole life bracing herself for the disappointment of an arranged marriage, while quietly hoping to land herself somewhere nice. However, this arrangement was nothing like what she had prepared for. He was over fourty years old, and already married to another woman--with children who were older than she! It was money and greed that convinced her father to agree in setting her up as the minor wife to a man who was much, much too old.

It was no help at all that Gao also had eyes for the province's eccentric doctor.

Dissatisfied with her lot in life, Gao would eventually follow her mother's tale of a time when she too was young, unwed but set to marry a man she hardly knew. As her mother's story went; she had been confronted by the King of Crocodiles, Lord Chalawan who offered to whisk her away. Being fearful of the monsterous Chalawan, her mother had declined the offer. It was Gao's hope that the mighty Crocodile King's offer still stood, one generation later.
She wasn't let down.

She called upon Chalawan, and he sprung forth from the river as though he'd been waiting a hundred years to hear her call his name.
Yes, he would take her to his home beneath the riverbed if she so felt that she must escape the arrangements--but only if she would agree to become his wife.

Gao's response to his proposal takes her on an unexpected adventure, and brings her some of the greatest friendships she'd ever have.
After all, being the first wife to the King of Crocodiles can't possibley be worse than being the second wife to that other guy.