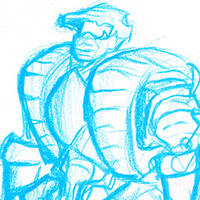 Wide, broad and stocky build, not exactly tall (best comparison would be slightly taller than IDW swerve) Coloration mostly white, with accent colors of light blue and grey, not too dissimiliar from colors used in snow camo. Helmet shape looks like a snoboarder's mask and helmet, broad stance, tread shoulders and wedge feet that have detailing similar to snow boots.

Jovial would be the best to describe it, good natured, even tempered, helpful, and a light jokester. Candid without being tactless or otherwise rude. A dangerous lover of puns, uses snow, ice, cold puns with wild abandon, at any given opportunity, and genuinely finds them a good idea. Even in other languages Blizzard will make the effort to find cold related words to work with.

While Blizzard may spend a lot of the time alone and in the environment, he still does love and long for social interaction. Though you can't see it, he is often pained by being alone or avoided for his very specific fixation. Some of Blizzards cheery disposition is just a translation of joy of being able to interact with others. Most of his collegues are unaware of how lonely he is, assuming Blizzard prefers isolation, and his lack of expression of lonliness only seems to cement this assumption.

Blizzard's first prominant skill is the ability to read the lay of the land, skills such as environmental obersvation, tracking, and map making. Combat comes secondary to this. While skilled enough in conventional weapons, he is most efficient in an assortment of cryo weapons, including projectiles, traps and grenades. Surprisingly good at snow and ice movement, modifications made specifically for movement in such environments.

Prefers environmental recon work more than combat. Blizzard loves spending time in the snowy quite, observing the subtle changes in the environment and the wildlife that survive it. He doesn't much long for cybertron, intentionally choosing off-shore tasks that would put him in these snowy environment, regardless of the planet. This disconnect from his home world makes a bit of a strange conflict with collegues, making social company a bit difficult to come by in some ways, much to his dissappointment.