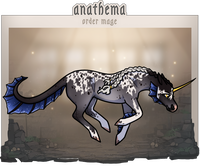 Having spent the majority of her life under the strict hand of the Order, Nellie is no stranger to the expectations of power and respect.. nor is she a fan of them. While she does know when to hold her tongue, she has a tendency to be abrasive when she can get away with it, and may not come off as the most socially adept. After her departure from the Order, she became determined to pave her own way, but has so little life experience in this respect that she often tends to veer toward looking foolish or pompous instead. She is very much self-conscious of her shortcomings, yet is unsure how to overcome them, and harbors quite a bit of resentment toward the Order for her upbringing. The culmination of these factors leads her to be a bit overly reactive, and she is quick to retaliate when she feels slighted, even before considering the intentions of the people involved.

At her core, Nellie is not malicious. She is ultimately just unaccustomed to the world at large, and the stress of adjusting to life outside of lecture halls and formalities takes its toll on her. She is ultimately in pursuit of a sense of belonging, though she may not quite know that that's what she's seeking. With no career to speak of nor any solid plans to pursue one, she spends most of her time roaming the city streets aimlessly or reselling trinkets that she's found, bought, or traded to maintain a small pool of spending cash. Through word of mouth, she also makes some money assisting locals who can benefit from her skills through subtle manipulation - for example, enhancing taste for the customers of a mediocre baker, or manipulating passerby's hearing for a busker to gain more tips.

She is not typically one to initiate a conversation without a clear purpose, but is not immediately standoffish when approached. She will happily engage in conversation should someone choose to speak to her first, but can be quite sensitive about their perception of her, sometimes to the point of becoming defensive or overcompensating in a way that makes her come off as unlikeable, even if the interaction was otherwise positive. If her social stumbling is forgiven, one will find she is quite genuine at heart, and becomes easily attached once she no longer feels that her autonomy or emotions are threatened.

Originally hailing from Mead, Nellie's magical abilities were discovered very early on. Her parents immediately surrendered her to the Order, and no effort was made to maintain contact. The discovery of her magic status was seen as more of a blessing in disguise to the young couple than anything else, having quickly realized that raising a child was... less than ideal.

As a result, Namarast is really all that Nellie has ever known. She was raised by the scholars and caregivers there, having arrived essentially as a blank slate. Her attitude was quickly squashed as soon as it emerged, with the authority figures around her doing their best to keep her in line. She fit the picture of a model student for most of her life, learning early on that acting up would do her no good, but at the same time quickly growing to resent the older members of the Order that restricted her. As a student, she was fairly average, simply bobbing along until she could finally get away from the institution that had bored and suppressed her for so long.

Nellie left Namarast as soon as her studies were finished, completely disinterested in pursuing further specialization. While she's not hellbent on sticking it to the Order or anything, she's never been particularly pleased about her upbringing. While her abilities could surely serve some good for the kingdom if she were to offer them - be it for battle, healing, or another field completely - she has little interest in pursuing this route if she can help it.

She now resides in a modest home outside of Faline, along the bay. It's a quick jaunt from the city, leaving it easily accessible for errands and day trips. She spends most of her time wandering there, and manages to make a bit of money reselling trinkets or offering her magic abilities to local merchants.

Nellie is able to temporarily manipulate others' senses at will, specifically by dulling or enhancing them. Examples include quelling an individual's experience of pain, increasing sensitivity to sound, inducing temporary blindness, or even more selfish uses such as enhancing the taste of a nice, warm meal for herself. In any case, her magic is limited to a spectrum of intensity - she can sharpen a sense as far as her magic will allow her, but she cannot create new sensations that do not already have a foundation in reality. For example, while she might be able to make a hum sound as intense as a scream, she cannot manipulate someone's sight as to cause hallucinations, nor invoke pain that is not borne of existing pressure. Proximity is necessary to some degree; she cannot manipulate someone she is not reasonably near to (dependent on Discipline).

With her current stats, her abilities are not as fully-fledged as they may eventually be. She can focus on only one individual and only one of their senses at a time, as well as being limited to a fairly short spectrum of intensity (meaning that easing someone's pain will not take away the pressure itself, for example, or dulling sight may retain shadows or light). In the future, her abilities will be expanded (loosely) as follows: