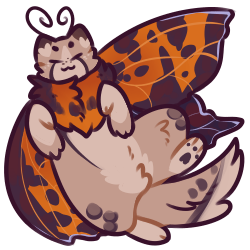 An outgoing and friendly cat, Avery is known for seeking adrenaline rushes and having a penchant for impulsive decisions. He loves surrounding himself with people and big scenes, captivating a room without really trying. However, he's good about quieting down when the surroundings call for it. A lot of his restless energy comes from the years he spent trying to outrun his past. For many years the pound of pavement and pathways beneath his feet was his constant; always on the move, Avery was afraid of setting down roots.

It wasn't until Morel Hollow, and his impulse decision to move in with Cider, that he found a place he felt he could remain in for more than a few months. Though he spent a long while fighting the urge to up and leave, slowly he was drawn in by genuine friendships and a sort-of family that refused to let go. Though still a bit of a mess with his emotions, he's working on keeping himself grounded and growing into a better self.