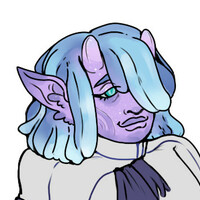 There are few worlds outside the goo aliens' system that have colonies of ther kind - if you can, you go home. So those that do exist usually exist because of necessity and disaster. Iu'husid would have been that, if it wasn't the armed forces of two worlds settling it - and it was in the same system.

Out-of-system colonies are either on otherwise inhabited worlds, don't last any longer than the trip they were originally provisioned for, or seen as miraculous.

Then there is the "becoming native" option. Niir's parent, according to the records available, was employed by a privately owned Plyd freighter (which is a redundant statement, if it beongs to a planetary government, it isn't Plyd), with two compatriots. The ships FTL mechanism failed - spectacularly, as is their wont - and only a few members of the crew were rescued. One other being of her kind. And she... succumbed to her radiation poisoning the next year, before the rescuing freighter made landfall.

Niir was in the rare position of having been both a "natural birth" - proper equipment not being available - and sisterless. Her parents' remaining compatriot tried to book passage back, but the baby was refused (Plyd rules preventing child trafficing). So she took upon herself the unenviable task of raising Niir on an alien planet.

She found herself in a Hrutxcan polygamous relationship - which was sort of similar to what Niir would have gotten in a natural birth colony, but with far more... masculine control. She and Niir were disciplined if they didn't maintain Hrutxcan features - though the masters of house were happy to modify the methods to be more effective to a goo's biological makeup.

Niir still carries recognizably Hrutxcan features, even if not the full form.

It was many years before the compatriot found another ship that would take her work and the child 's passage.

And. Niir found the world that was supposed to be theirs... quite foreign.