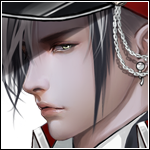 One of the Army Generals of Hell, also the demon prince of Hell

Quint is sometimes described as being "severe". He is strict with his soldiers, expects his orders to be followed to a T, is quick to give out punishment and just his stern gaze can silence any dissent. Despite all that however, he is fair with his punishments and his stern gaze is able to see potential in the most questionable of places, an ability that is valuable in war and in finding soldiers for his elite squad. He smiles rarely, but when he does, you know it's genuine.

Raised in a way you would expect a prince of Hell to be raised, Quint was a perfect son. He excelled in all his lessons be they military, combat or politics. He was fine with his life, content with where he was and what was expected of him for many, many years. As he was on a trip, he ran into a human. It wasn't uncommon to run into humans, he lived in Hell after all, but this one was odd. Most humans were disoriented, and trapped in the hallucinations of their sins but not this one, this one was very much lucid and very much able to talk to Quint like it was nothing out of the ordinary. Quint was fascinated at first. He had never met a human like him before but soon, the human started to ask him questions he didn't know the answers to: What did he want out of life? What did his future look like? What were his ambitions? For some reason, Quint just didn't know how to answer and it frustrated him and scared him. He ended up lashing out and killing the human accidentally but despite that, the effects of what the human had asked of him still lingered. Soon after that, he opted to join the military against his father's wishes, wanting to find out the answers to those questions. Even though the military was just another way to be ordered around, it still gave him purpose and being away from the controlling influences of his father allowed him to grow and develop a mind of his own.