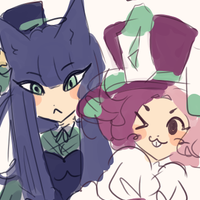 bunny boy magician and his catgirl assistant!! they cannot be separated which is why they're smushed together in one toyhouse profile

pavlushka & katerina are a traveling magic duo! they're constantly on the road with one of those circus wagon thingies. best way i can describe it is........ the thing trixie has in mlp. they don't really have a home, so their wagon is the closest thing!
pavlushka has always dreamed about being a performer & is very dedicated to his craft. he's proud and boastful & claims himself to be the greatest magician in all the land. despite this, he always messes his tricks up, whether it be due to clumsiness or just...... a lack of talent. nevertheless, he tries and tries again. he will be the worlds greatest magician, everyone will eat their words!
katerina doesn't feel strongly about magic, but goes along with it to make pavlushka happy. somehow, she always ends up being the fan favorite ( which ticks pavlushka off at times. )

the two of them are orphaned siblings (or.. cousins? related in some way 4 sure i just cant decide) who share a very strong familial bond. no matter what happens, they've always got each other! katerina is especially very protective over pavlushka. it's her duty as an older sister to keep him safe

pavlushka is modeled after a rabbit! ( he is the bunny in the magicians hat . lel ) with his big front teeth & big beady eyes. he stomps his foot & chews on his hat when he's angry. he loves talking ( especially if the topic is himself ) and has an endless supply of energy

katerina is catlike and aloof. she doesn't express much outwardly nor speak much, she relies on pavlushka to do most of the talking. her pupils are typically slits but expand when excited, just like a cat + she has the little fangs of a cat
most people cant tell if her animal ears are accessories or not