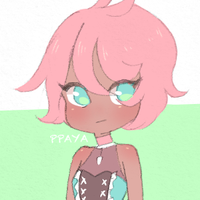 Gaia is a young lady who works at a circus as an acrobat; she performs as a gymnast, contortionist, and tightrope walker. She also does shows as a ballerina on the side whenever the oppurtunity arises and her schedule allows it. Other people would describe Gaia as being narcissistic and full of herself, which is something she doesn't deny at all. Her work is what matters most to her, and she cares more about what people think of her on stage rather than how she acts in a social encounter. She prefers to be secluded and will often be annoyed when forced into conversations, especially with people she does not know or does not care about.

Gaia is 5'7" / 171 cm tall and often wears heels that are 2-4 inches / 5-10 cm high. She has an obvious hourglass figure and her performance outfits usually include a fake corset to accent her small waist. Her hair, which she dyes to be a bublegum pink, is short and fluffy. She has a very faint blue eye color, which looks gray in some lightings.