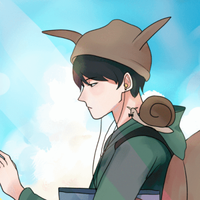 About
"I'm bad with words so sorry if I say something wrong."

David is a digital artist and has a pet snail named Sebastian. He shares an apartment with his girlfriend, Bianca. They moved into an apartment together after a mutual friend, Hananim, introduced them to each other because they were both in need of a roommate. He did not like the idea of living with a stranger, but eventually agreed on the idea due to his desperate need of somewhere to live. Bianca and David got along surprisingly well and eventually started dating a year and a half after first moving in together.

He depended largely on his older sister when he was younger. David would cling to her during any social event and would reference to her when making decisions. It is quite possibly because of this that he grew up to be socially awkward, because he didn't have the right learning experience as a child. He's not scared of other people, but instead scared of himself doing the wrong thing and bothering someone. Because of this, David never approaches a person on his own. All of his friendships started with the other person initiating it, such is the case with his closes friend Hananim and girlfriend Bianca. It took a while for him to become comfortable with the two, but their relationships now are firm.

David stands at 5'5" / 165 cm and has long skinny limbs. He loves to wear beanies, his favorite being a snail-beanie, and highly prefers clothing that covers all of his arms and legs.

Bianca His roommate and girlfriend. They moved into an apartment together because both of them were in the need of a roomate. They started dating later on and now both depend on each other for joy as well as emotional support.

Hananim They met in an art class in high school and although it took a while to happen, they built a small but significant friendship. Both of them attend the same college now, and she introduced David to his now girlfriend Bianca.