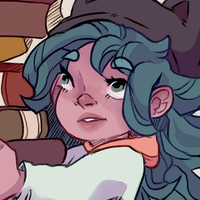 About
"I have all the time in the world yet it always seems to slip out of reach."

She's a goof and her life would be a mess without her boyfriend, David, and close friend, Leia. Bianca spends her time reading about useless information she'll probably never need (but thinks she will need) and taking cat naps around her shared apartment. She enjoys creating ideas for stories but can never find the dedication to make more than a very short story.

Bianca enjoys exploring and trying new things so she doesn't stick with just one thing at a thing. She strives to be herself and have fun doing what she wants to do, but also wants to those around her to experience the same joy as her. Her ideal career choice is veterinarian, and is attending college to work towards this dream. In the mean time, she works as an assistant at a local library.

Bianca has a petite body, messy brown hair that is dyed blue, and green eyes. Her ears have a small point at the top. She's nearsighted and prefers to wear contacts over glasses because she once fell asleep with her glasses on and they broke. She is 5'1" / 155 cm.

She only wears clothing that are comfortable to her: loose or stretchy. Her closet is full of clothes she bought simply because they're cute but will never actually wear them. Her favorite hat is a black beanie with cat ears that David gave her as a gift. Bianca does not like to wear shoes as they're either suffocating, uncomfortable, or hideous and so she sometimes take trips outside with only socks on. Though she doesn't want to wear shoes, she also doesn't like her feet to feel naked and therefore usually wears two pairs of socks to make them feel less exposed.

Bianca was born when her mom was 16. The mother was upset but did not blame herself for getting pregnant at a young age. The father gave no acknowledgement of the baby being his which made her even more angry about it. The mother's parents, in attempt to help their only child, offered to take care of the baby until she finished her education. They settled on this agreement, but when she left to attend university she never returned and cut off all of ties with them.

Feeling as though they have failed as parents, Bianca's grandparents were determined to raise the baby to have a more positive life than that of her older sister. They decided to treat the child as their own daughter and raised her. Bianca grew up as a happy and healthy child, a type of person who is glad to be living and looks forward to having a good future. When she was 13, her grandfather died at age 55. Bianca's mother came back to pay respects towards her own father, but asked her mother to continue raising Bianca as she now had a husband and two kids. The grandmother was angry at her for seemingly not caring about her own daughter, though she ended up agreeing because she realized that Bianca shouldn't be given away to a mother who abandoned her.

After going a period of time of being sad due to the loss her grandfather, Bianca continued through the rest of middle and high school. She decided to go to the nearest veterinary college and live with her grandmother for what little time the elderly lady had left, which they both expected to be soon due to cancer. At age 59, the grandmother died. Bianca, now 20 and almost done with college, went through a time where she felt useless and helpless. She was left with a fair sum of inheritance and the house where her and her grandparents lived, but it didn't fill the lonely void in her. It didn't feel right to her to live in the house all by herself. She figured it would be best to sell the house and put the money from the sale plus the inherited money into a savings account. Bianca asked her friends about her moving in to live with any any of them, but no one had any extra rooms. Her friend, Leia, however, had a friend named David who needed a new place to stay as well. Although he would have prefered to live on his own, David was starting to become desperate as he could not afford a place on his own. After a bit of persuasion, Leia managed to get him to agree with living in an apartment with Bianca. David and Bianca looked for a place to live together, and eventually found one that suited ther needs. They actually got along well living together; she gave him amusement that his life was missing, and he filled the lonely void in her. They started to date after about a year and half of living together.

David Her roommate and boyfriend. They moved into an apartment together because both of them were in the need of a roomate. They both depend on each other for joy and emotional support.

Leia A close friend that she met through mutual friends soon after starting college, although they don't go to the same college. If there's something Bianca can't talk to David about, she'll talk to Leia instead.