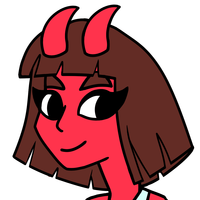 Lily is a succubus who just moved to Lucia, chasing her dream of becoming a famous fashion model! She now works at Luna's cabaret as a waitress and dancer, while taking small modelling jobs on the side, trying to work her way up into the big leagues.

Lily has a very flirty, confident and brash personality, often jokingly (or seriously) flirting with strangers and friends alike, making sexual jokes at all opportunities, she has almost no filter which leads to her cussing a lot and always speaking her mind. She has a bit of a temper and is generally pretty emotionally driven, but isn't stupid at all.

Lily is often going on dates and having one night stands, both to feed her need as a succubus for soul energy, and as a way to ward off loneliness. Lily isn't good at making and keeping close relationships, and after moving to Lucia, she was left without any family or friends besides Sam. She&#39;s usually lonely and sometimes suffers bouts of depression because of it, and going on dates makes her feel less lonely. She is ok with being sexualized for being a succubus and tries to use it to her advantage, but can oftentimes fall into a trap of viewing herself as valuable only for her sexuality. As she makes more friends, she starts to value herself more, while still continuing to date around.

She doesn't believe in any gods or spirits, and is incredibly skeptical of urban legends and ghosts and the like as well.

Lily grew up in a town much smaller than Lucia. She lived with her mom (a single mother, she's never met her father). Her home town had very few demons and was mostly made up of elves, and she always stood out in school. She never had many friends and was something of an outcast for most of her childhood. Her only real friend was Sam, who she met when she was about 13 years old. They bonded over a shared love of the supernatural and would often hang out together and explore their town.

When she was 16, she got her first job as a waitress in a small diner, and she met her first boyfriend, a 18 year old elf named Anthony she met in school. Anthony was liked by Lily's mother, but wasn't a very good partner and only really liked Lily because he thought she was hot, he had a thing for succubi. Lily fought desperately for his attention as it was some of the first positive attention she had ever gotten, and she was beginning to reach the age of maturity for succubi, where she would need to start feeding off other's life force. Anthony used this trait and her desire for attention to make her more dependent on him. Lily became obsessed with making him happy, and this combined with her boyfriend's jealous tendencies caused her friendship with Sam to begin to fade as she spent more time with her boyfriend and less with him. It was around this time that Sam developed a crush on Lily, and then moved away to live with his uncle in Lucia. Oops!

Lily had always loved fashion, and when she was 18 she got a temporary job as part of a school program as a set assistant for a modelling company who came to her hometown for a summer to shoot pictures of an angel model named Astaroth (alternate universe Astaroth lol) in the town&#39;s unique environment. She learned a lot about the industry, met a couple insufferable set assistants from the same program as her, and quickly became enamored with the life of a famous model. Since then, she aspired to be a famous model, just like Astaroth.

When Lily was 19, she had graduated high school and had grown sick of her hometown, her mother, and her boyfriend. In one impulsive decision, she decided to travel to Lucia to try to become a fashion model. She resolved to completely reinvent herself in one fell swoop, and this is where we find her at the start of the series.

Currently being worked on! This arc will be about Lily coming to Lucia, falling into a depression, beginning to objectify herself, before ultimately becoming friends with her coworkers and especially with Stella which helps pull her out of her depression and helps her realize she's worth more than just her looks. I'll update this later with a more complete summary as I write more!