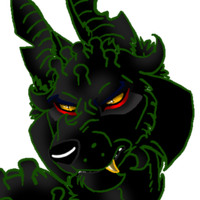 'Looks like you're in minority, so I'm the new King in town now!'

-King Matthias talking to the cells-

● He was the very first character that I created for Virus Attack. He also became my personal most favorite, and even my comfort character :3

● In early development, Matthias was actually named 'Korona' (misspelling of 'Corona'). I changed his name, due to Korona being unoriginal. He was also almost going to be named Balthazar, but I just love the name Matthias. The name Balthazar went to his great-great-grandfather.

● His official family name is Sarbeco, which is derived from the Sarbecovirus subgenus. Sarbecovirus stands for SARS Betacoronavirus.

● He has schizoaffective disorder.

● A kindhearted anthropomorphic version of him plays a role in my book, Rebel Virus.

● In some short comics/stories, King Matthias is 'frenemies' with a monkeypox virion, named President Jack.

● He's afraid of rhinoviruses, because he got scratched on the nose by one when he was a teenager. He also almost got killed by a tapeworm, nicknamed 'The Banshee', when he was a little puppy.

● Spiritually, I associate Matthias with the fire and metal elements. Fire destroys everything, but it also makes way for new life to grow; Matthias has a strong desire to wipe out humanity, so other animals will return to their original territories and thrive again, and trees and bushes will grow back and overgrow the abandoned human homes. Metal because of Matthias' strenght. But, the fire also stands for his disorder, and spiritually-wise, metal isn't srong against fire.

● He speaks with the voice of Christopher Lee and with an English accent.