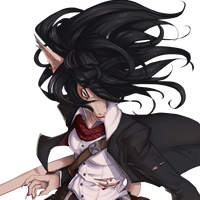 (This character was originally made for a Final Fantasy Roll20 campaign.)

Tesla's story begins with her parents, two burmecian. Her father's name is Luther and her mother's name was Teyana. Luther spent his days traveling around in a caravan selling small little machinery and knick knacks around the country with his best friend Reginald, a stern and down to earth ronso. He soon ventured to this small town where he met the love of his life; Teyana. Teyana was the town guard who spent her off days helping out in the daycare taking care of the children there. Though she suffered prejudice and was often blamed for suspicious activity because of her being a demi-human; she remained vigilant and courteous and soon earned the trust of the townsfolk. Teyana was a very soft spoken motherly type, always looking out for everyone which made her get into the roles of caretaker and gatekeeper of the town. Her mother was also known for having what the folk called a 'Demon Side' where her eyes which were almost always closed would open up to give a bone chilling stare, even through her helmet as she worked would cripple wrongdoers in their tracks. While her father, living the life of adventure was mostly carefree and rather upbeat.

The two met over an incident involving Luther as he raced into town being chased by a gang of bandits who were quickly intercepted and defeated by Teyana. Upon them meeting each other they were surprised that they were both burmecians who after small talk decide to hang out while he rested in town for a short bit to repair his caravan and relax before traveling back out. One thing led to another and they started dating, Luther deciding to settle down and live with her as Reginald became the third wheel, happy to help out his friend from childhood start a new life. Fast forward into the future Teyana is pregnant with their daughter! However due to complications with the pregnancy she unfortunately does not survive giving birth to Teya, the name Tesla was given at birth, named after her late mother. Stricken with grief on top of the piled on anger from the grieving townsfolk; Luther gathers his old pal and leave again on the caravan, taking care of and home schooling Tesla as they travel around the country side. Tesla grew to have a fondness for firearms so her dad gave her an old family heirloom of his called Ol' Reliable which at the time was unusable so he felt no harm in having her keep it and she has kept it close to her ever since.

One day while they were riding around they were attacked by a rogue group of bandits during a hectic storm while they had set up camp to wait it out. Luther held them off alone ordering Reginald to get himself, Teya and the caravan to safety. Reginald and Teya managed to escape and from then on Reginald took care of Tesla who was about 10 or so at the time as if she was his own and raised her for about 6 or 7 years until he soon grew very ill both due to his age and from traveling so much without proper rest or funds for medical care.

Reginald soon passed on leaving Tesla all alone to take care of herself, selling the cart and the wares leaving the only thing to her name a bag of money, Ol' Reliable and the clothes on her back. She soon got a tiny apartment and made the bare minimum to survive doing odd jobs for a variety of odd people to make ends meet. One of the people who employed her was a man who owned a lumber company that was dealing with some rampant wildlife and needed someone to chase them off. She took the job and on the logging site meets an albino burmecian, a rarity among rarity named Hermes. Almost instantly sparks flew between the two upon meeting each other. They soon date and grow close and not too long after they want to start a family together, Tesla being 20-21 by this point. She soon gets pregnant and Hermes without Tesla knowing decides to go to a loan shark to buy them a nice wooden log cabin outside of town thinking it'd be a good relaxing place for his family and lied saying that he built the house himself in his spare time while Tesla; being the trusting type never questioned it.

In the late stages of pregnancy Hermes became stressed out, angry and agitated trying to come up with enough money to pay back the loan shark as his time to pay was nearing it's end and the lodging company he worked at shutting down. Tesla prying into what was eating him caused him to snap on a few occasions even going so far as getting physical and apologizing right after. The time was up on his payment and the loan shark sent out a group of thugs to their abode, they storm in and Hermes trying to protect his wife dies in the process with a slow and painful beating and Tesla coming into the room hearing the ruckus attempts to save him but soon gets wounded herself and gets beaten nearly to death as well. Before they finish her off the townspeople come in before it's too late due to their being reports of some suspicious men wandering around the town and they bring her to the medical ward to heal her up, she recovered but her unborn child did not make it.

The whole ordeal makes her so stricken with grief she goes into a long period of depression and becomes mentally ill for a bit. To cope with the loss of her future she named her family heirloom Rusty, the name she was going to give to her son and fell into a dark state of constant drinking and binge watching television, going back to her odd job days of hunting while being plagued by nightmares of her subconscious in the shape of her late husband berating her ineptitude to save anyone whose violent physical actions against her tenfold in her nightmares. The issue becomes so serious she starts getting less and less sleep, drinking to focusing on even more television to keep her up while her health started to rapidly decline. In her nightmares she dreams of having her child, a burmecian that bares her fur color with eyes as red as his father's that would hold onto his mother and Tesla, holding her grip on the poor boy as the nightmare spirals worse and worse she would awoke clutching the gun to her body believing in a connection between the two.

In an area where she had moved in one of her constant relocations there was a law that you weren't supposed to be hunting without a proper license so she gets a hefty fine placed on her that can only get rid off only if she were to attend a nearby hunter school. (Which is where the campaign Tesla was originally created for starts.) With no other option she decides to go to the school and start her new journey under the surname Tesla, a combination of her first name Teya and her last name Svetlana from her father's side, meeting a large number of new people and friends along the way growing close to them where she can call them her family. At first she called herself a genius to make people think she was better than she already was and to distance herself from everyone but being with other people she had grown to let out her true colors, being the rough housing sarcastic tomboy that she is while giving a motherly care to those who are down on their luck or need help, getting her mother's selfless attitude and her father's carefree demeanor.

Later on in her story she ends up meeting her father again when she was traveling past the sea where a group of bandits had tried to take her ship and soon meets her father, the man who had lead the attack. Upon sacrificing himself he was promptly beaten and captured and turned into a slave and burmecians being as rare as they are; the bandits had cut off parts of his body to sell to the highest bidder and having him replace it as best as he can with his resourcefulness. From working from the ground up he made his way through the ranks and after murdering their leader he soon took the empty spot he just created, having nothing else to his name. He then traveled the world to search for his daughter in hopes that he can find her again, along the way replacing his missing body parts with advanced cybernetics he design and created.

Now with the two back together they attempt to save the world one step at a time!