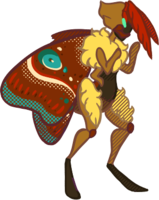 General curmudgeon, grounded flier and absolutely bitter for it. Found a strange new lease on life, if a bit strained, through the companionship of strange new bugs.

Tall, lanky build, mostly brown, black and rust colors, covered in a much brighter yellow fuzz on the chest and upper portion of the extremities. Has large mint green eyes, and bright red fuzzy antenna. Has a set of wings, with a terra-cotta, turquoise and cream coloration, however the upper portion of his left wing is damaged beyond use.

Standoffish and asocial, however keeps a certain prim air about him. He's refined in his behavior and presentation but doesn't like to interact with others very much. Very particular about how his appearance is, and what textures he comes in contact with, making him very fussy about anything sticky, slimy or otherwise dirty.

Once was a rather skillful flier, not especially fast but very accurate in his judgement of space and ability to plot his landing. Without his ability to fly, he still has his navigation skills, but his adaptation to being grounded has left him feeling quite useless.