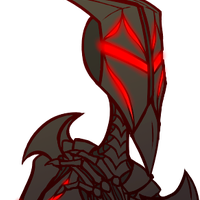 The leader of the base Tesca's Pretorian unit, and the original Pretorian. The results of his brain-mapping into his body have left him without any information about his past.

Munin's build is a classic Light Pretorian build, lithe and tall, standing at seven feet tall. His primary function is for stealth or surveillance, granting him a black paint job. His decorative elements glow a vibrant red, that can be turned off if need be, helpful when skirting through maintenance shafts to avoid contact with others.

Like his namesake, his features are emulate that of a bird, with a long an narrow mask, with a 'beak' looking panel on it's front. The rest of his decorative elements are sharp featured, narrow and pointed, making him look even more spindly than other light class pretorians.

Mostly quiet, and not particularly social. Since his memories have been removed, whatever personality he had before that was shaped by his past memories has been removed. This often leaves him coming off as very cold, as in a way he has found he has to re-learn certain more abstract aspects of social interaction. Oddly enough he finds himself with an attraction to humor but without an ability to execute it properly, which often leads to unintentional, deadpan sarcasm.

He has an extreme dislike and even fear of being worked on by anyone else, as well as a strong distrust of scientists and military leaders, which only prompts him to continue avoiding contact with just about any one person that isn't a Pretorian. His fear stems from the speculation that his mind could be tampered with, causing him to loose more of his discoveries about who he is, or simply to silence him, in addition to his fears and discomfort of being used as a guinea pig again.

Unlike the rest of the Pretorians in his unit, Munin appears to have no skill at all in the way of combat. Instead, his skill lies in his understanding of his own body and the entire line of Pretorian technology. Both through instinctive remembering, and personal experimentation, he knows the most about Pretorian function, capacity, and repairs. While there is a technician team that works on the major repairs and upgrades for the unit as a whole, Munin prefers to take it upon himself to repair and care for the rest of his team as much as he is allowed, going so far as to provide them 'under-the-table' upgrades.

In addition to his technical knowledge with hardware, he shows skill in certain areas of programming, especially the more taboo field of AI programming, as his own personal experiments have shown.

With no past to speak of, his personal life, apart from his work in the military, is absorbed in finding what he is and who he used to be. Hours of his time of go into the dis-assembly and re-assembly of himself, as well as the addition of new tech, either to improve himself or simply to experiment and make use of his idle time. Apart from his own life, he uses this information to make plans for a new and permanent future for himself and more of 'his kind', autonomous of the military.

Due to his fears of further memory loss or coverup, he keeps hand written journals hidden away from prying eyes, that he hopes he can read to remember his plans, discoveries and theories. He also likes to keep a collection of varied textured objects and materials, using the feeling to remember what it was like before, or potentially trigger some hidden memory. Aside from that, he has a fixation on textures he can hold, as the feeling in his hands are the only feelings he has or can remember at all.

Though a brain-mapping process his mind was transferred from his original organic body to a hard drive of sorts in this new one, but not completely. The process was not completed properly and the majority of his memory and creative side were lost, leaving him with only his semantic memory. To make matters worse, no officials have been exactly forthcoming about his past, he was given a name that he was supposed to have been, but he doesn't find that the identity and rank given him matches the knowledge he has.

From the time of his first remembered consciousness, he was subjected to several tests and experiments, left to be completely isolated otherwise. Left only to himself, his body was the only thing he could interact with, leading him to pull himself apart. When finding a strange ease with seeing how his body worked, he became more obsessed with his form, where it came from, who made it, and how it worked. In doing so, he found improvements for himself, which made him a target of more experimenting and prodding, often forcibly shut down so that he could be disassembled and his discoveries could be applied to their future line of Pretorians.

This resulted in a fear of being forcibly shut down and technicians. Eventually he learned how to make improvements in secret, decreasing the amount of times he was prodded at, and keeping a small semblance of peace for what he could. Though he still did not trust anyone enough to talk to, the hours of silence came with it's own disturbances. First resolving to simply speak out loud for the sound of some voice, it was not enough and work was made to create some sort of companion that he could trust.

What resulted was a very difficult and awkward reprogramming of his own nanites, an experiment that resulted in an illegal AI creation. For a year, he only had this new, growing AI to communicate with, and the only thing he could trust in the small, isolated world he was trapped in.