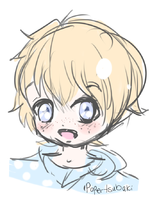 When Roxie was seventeen, she got married for the first time and found out she was pregnant in October of that year with Gage after planning with Aimee. She had begun exhibiting signs of her bipolar disorder for the first time and had severe depression as her pregnancy progressed. Theunsteady climate of the household caused her to be under surveilance by her boys and Roxie began to feel like she was a burden on everyone she loved. After Gage was born, her health improved greatly and she began to realize that he was the reason she wanted to live from thereon out.

When Gage grew up to speaking age, he would go around to women and flatter them, Roxie often having to explain that he's as much of a charmer as she and her husband were as teenagers. As he got older, Roxie began to spend time with Gage, singing with him and taking him to school. Gage started school in September 2017 and was quick to make friends, much like his father.