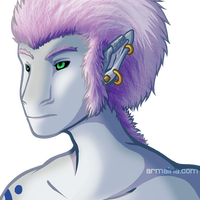 Born to a politically royal family, Truda Sjaen is the last remaining survivor and effective leader of the remains of the Sauristan society. After becoming fed up with the rule of the nation she had been the General for, she left the military life for good. Without a real purpose or desire to reclaim a throne, she traveled to unknown parts of the Galaxy meeting her current partner, Kitra, in the process. After a mistaken encounter, Truda found her place in the crew under the command of Captain Grace Armes.

Short at 5'2", stocky, burly build. Skin is pale, near white, with gray around her back and extremities. Eyes have black sclera with green irises. Hair is coarse and fluffs up like a lion's mane, the base hair makes up a Lavender color where as the top hair is white, giving it a streaked look.

Both ears have been pierced in multiple locations. On her left, she bares the traditional Sauristan crest tag, for both ears she has a single piercing on the top cartilage and two in the lower cartilage. The studs or loops she wears change in color and type. She has several tattoos of certain significance oh her, first a set of navy blue stripes that run from the base of her neck to her tailbone. The tattoos on her outer forarms are composed of symbols from the Qytir scrip signifying the clan she was inducted into on one arm, and her partnership to Kitra on the other.

For her attire, she prefers practical clothing, either earthy colors or camouflage best for the area. She wears pants that fit well, but have a decent amount of pockets, sleeveless tops if she wears them, and rarely wears any feet coverings.

Surprisingly more volatile than Grace, Truda has a rather brash personality, and doesn't care what other people think. She doesn't seem to have much of a concept of a personal filter and will say exactly what comes to her mind regardless of how harsh or offensive it may be perceived. However in many cases this response isn't due to hatred or spite, but rather a desire to be honest, even if it lacks a bit of tact.

She never takes anyone for their word, only by their actions will she even consider to trust them. However for those she does trust she considers those pacts deeply important and remains steadfast and loyal to those that show they can be trusted.

Similar to the rest of her heritage, she enjoys the thrill of the fight, whether if be a friendly spar, a competition, a senseless brawl or warfare. She has even provoked fights intentionally for this reason.

Due to both her race and military history, Truda is very skilled in various forms of combat.

Generally her preferred form of combat is either unarmed or wielding a form melee weapon. Her unarmed combat mostly uses a form of Sauristan martial arts, which sometimes looks and feels like a cross between Krav Maga and Hung Ga. If she chooses to fight armed, while her preference is for bludgeoning weapons, she is just as effective with small blades and other forms of small, close combat weapons. She prefers to not use long reach weapons such as Polarms, Staffs or Swords if she can avoid it.

In the realm of Firearms, she is skilled enough to use and fire accurately with a wide range of firearms. If she is unable to engage in melee, she mostly prefers to use shotguns for close range, and high powered machine or chain guns for long ranged and/or piercing. She can also use ranged weapons such as grenade launchers and rocket launchers, and though she can use such things without error, she is not particularly skilled with it. Similarly, her knowledge with explosives on a whole are much more limited.

In the more specialized field, she is rather good with larger combat vehicles such as Power Armor or Mechs. Her skills with Power Armor are much more honed than that of her Mech skills, however she can pilot both adequately. There is also a very specific type of Sauristan combat armor that is similar to a sort of Power Armor that she is more skilled with, however components for this are more limited and her access to this piece of equipment is often rare.

Apart from her personal combat prowess, she is also skilled in matters of military tactics, planning and leadership. Despite her abrasive nature, she has strong leadership skills and can remain cool and steadfast in the most stressful of situations. Due to her levelheaded approach and her willingness to take the front lines with the rest of her troops if needed, those that serve under her have often show great deal of loyalty to her. Even if they wouldn't invite her to any social gathering.

Combat and feats of skill make up just as much of her personal life as they have her professional and occupational life. For her it is her primary motivation in most anything, and the only purpose she finds to be true or earnest.

Sparring in general she sees as a recreational activity, one she shares most often with Kitra. Even then, she retains a need to expand her list of opponents, taking much time to track and keep up with the various Sauristian 'pits' and other competitive combat establishments. This both serves as a matter of personal enjoyment, and a way to sate her instinctive urges of aggressive physical altercation.

Being of such high energy as Sauristans often are, she has very little in the way of 'downtime' that isn't either personal training of some sort, even her reading material consists of war strategies. This isn't to say she doesn't enjoy anything else at all, but nothing else reaches that level of interest or focus for her. She will occasionally watch media with Kitra, provided it's not too quiet, slow or materialistic. She does find some amusement in watching him play more action oriented video games, though is a bit too restless to play them herself, finding it frustrating that she's limited to mere button presses and computer controlled response time.

Growing up in the in a strange, Royal Sauristan family, and being the sole daughter of the then Queen, her life was a little more unusual for most Suaristans. While a very strong effort was put into her upbringing to make her one of the 'upper class' of the society, expecting her to learn certain 'refinements' and classical aspects imposed on them by other cultures. Truda had no desire to adhere to any of her mother's wishes, preferring the more traditional life of tests of combat for respect and honor, ditching classes to explore the wild or visit the gladiator pits.

Despite avoiding classes and any 'royal' duties as much as possible, she was still expected to join in intergalactic summits and political events. Expected to take over after the rule of her parents, she was educated in matters regarding the various treaties, military, histories and expectations of their allies, and participated in the decision making on these matters when of age. It was on one of these meetings, after she had left her home as the sole representative for the Sauristans, her parents staying home for the organization of a new warfront mission, that her home planet was delivered a devastating blow.

With the population depleted and scattered, the home planet left near inhabitable, she was left as the sole representative for the Sauristans as a whole while still in her early adolescence. It was a role she adapted to surprisingly well, her life of playing hooky in favor of typical Suaristan life gave her a strong insight to what her remaining people wanted and needed to hear, in order to keep up their moral in the armies that remained. For a while she kept herself as more of a liaison to the armies and the varied allies that needed them, until a large war brought her into taking up the role as a General of a planetary army.

While the intentions of the war were well seeming at best, the war waged on into petty differences and foolish mistakes made by the ruling party, despite Truda's urgences against such choices. In time she became fed up with her role as merely a lacky for the planet's ruling class, and gave up her position as General for their army. With her leave, the Sauristans dropped their arms, leaving the war they no longer felt and duty or honor toward, leaving the planet's forces severely outnumbered, and easily defeated. Jaded and frustrated with the political battlefield, she left the alliances and her effective seat as the Sauristan leader.

From that point she wandered the outer circle of the alliance, there still being sore feelings about her abrupt leave in the middle of a war, searching for other purpose for herself and learn more about how the rest of the galaxy dealt with their problems. Her travels found her from planet to housing colony, participating in bar brawls, conflict resolution, and a few of the Sauristan Gladiator Pits that the remnants of her species had found refuge at.

It was then on Di-kal, she spent a few years with a particular tribe on the planet, adapting to their life and customs, in order to assist them in an invasive war on their lands. In time, she eased the 8 year war between 2 large tribes. During this stay with the Qyitr clan, she found companionship in Kitra, one of the native warriors of the tribe, even taking part in rituals and challenges to be accepted as one of the tribe, in order to have union with Kitra in his own tradition. Still restless, finding no extended need for her presence with the tribe, and with the knowledge of the slowly approaching end of her lifespan, she left Di-Kal, now with the companionship of Kitra.

Her patterns of planet and colony hoping continued as normal, easing conflicts as they found them running into a few odd jobs to pay for their way around, and the occasional brawl to keep herself level. While attempting to wrangle a particularly troublesome character that had been the source of much grievances in that sector, a chance encounter with Captain Grace Armes, nearly resorted in an erroneous conflict between the two. Upon finding out that their target was the same, and neither were in league with the bounty, they worked together to take him down along with his associates. After the conflict, and much friendly discussion, the Grace and Truda determined they were not too dissimilar in their thoughts and goals. Without much effort, herself and Kitra were welcomed aboard as crew of the Starship Lollipop.