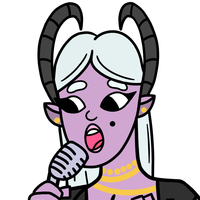 Stella is a demon who lives in Lucia. She works at Luna's cabaret as a lounge singer, and is their star attraction. Her voice is incredibly soothing and awakens deep emotions in those that hear it.

She's an incredibly calming presence, and is a great friend, often acting as the "mom friend" in the group. She gives the best hugs and and is very quick to hug her friends! She's always ready to listen and give advice. She's often times the mediator, and the straight man to her friends eccentric personalities.

Stella is currently single, but wishes she could find her one true love. She occasionally goes on dates, mostly with men, but hasn't found "the one" yet. She's absolutely a romantic! She also has a hidden kinkier side that takes some time and effort to draw out of her. She's usually considered to be among the prettiest in any group she's in.

She has a love of the finer things in life, enjoying live music, candlelit dinners, wine, fine art, and other such luxuries. She has very refined tastes and is always trying to introduce others to "classy" culture, but she tries very hard not to be a dick about it, she absolutely does not want to come across as "that" guy!

Stella always loved singing, as a child it was all she wanted to do! She grew up with relatively supportive parents, and eventually left for Lucia in hopes of becoming a famous singer.

She sang at open mic nights and auditioned for all sorts of shows, but never got any real jobs from it. She eventually applied for a job at the mob ran gentleman's club as a dancer to make money, but quickly found out that the club was an incredibly sketchy place. It was called a gentleman's club, but it was more like a brothel, and many of the workers there were treated very poorly. It was here that Stella met Jen, the top "dancer" at the club and the big boss's personal pet. They grew incredibly close as friends, but over time Jen started to act more distant, confused, and uninterested in her as her "owner" slowly broke her with drugs and forced training.

Stella was eventually violently fired from the club after trying to break through to Jen. Stella went drinking at Luna's cabaret, broke down crying, and spilled her emotions to the bartender. The bartender then offered her a job at the cabaret as a lounge singer. They never made her dance at the cabaret for fear of bringing back bad memories, though over time, she began to dance on her own time again, because she found that she genuinely enjoyed it, and couldn't let the club take it away from her.

Since then, she worked at the cabaret as a lounge singer, showing warm kindness to all her new coworkers, and never forgetting about Jen, always thinking of ways she could try to get her away from those men.

Stella is largely a supporting character in season one. She invites Lily out for coffee after noticing her seeming very depressed, and tried to get her to make friends with her new coworkers. She also takes a more protagonist role during an arc about finding Jen at the gentleman's club.

Stella attempts to make Lucy happy after seeing her apparently miserable cleaning up the cabaret, but isn't very successful.