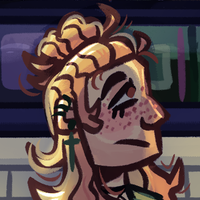 weed/drug 'dealer' to his friend group. he says he gives them a discount. he actually does not sell weed to much anybody else.

part of a wild ass friend group that's practically a gang at this point, but usually kind of a background friend, just there to watch chaos ensue and occasionally intervene when his friends are putting themselves in danger

overall he's a lot more lowkey than the others in his group. getting into fights for no reason just isn't his schtick, even though he rebels in other ways. probably wouldnt even jay walk

he's got that religious trauma(TM). he was homeschooled by his parents

he can cook but doesnt like to do it bc there's some baggage associated w/ it so he usually just orders grubhub / fast food. unfortunately this takes a good chunk out of his paycheck and it's not really easy for him to just buy things for fun and self care

the cooking thing is related to trauma too. rip. his mom taught him to cook so it reminds him of his childhood. he CANNOT stand cooking for people

he has a tendency to write everything down, especially to-do lists. not because he's forgetful so much as he just likes to have them on hand. he's not very ambitious and doesn't tend towards big plans so much as trying to focus on small improvements and things that are vital in the moment