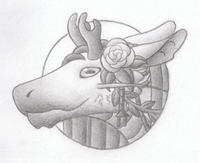 Not much is known of the lives of Doom and Oblivion before they came to the Seafoam Clan aside from them being acquaintances of Naemi. When Naemi settled into living with the clan for an undetermined amount of time, she soon invited the two Veilspuns to work for her. They are her eyes and hands that see and reach to the outside world, fetching and delivering her messages and goods as well as gathering information from the general state of Sornieth. While Doom mostly works close to the clan, Oblivion travels all across Sornieth and often spends several weeks on his trips to the fartherst corners of the world. Whenever he is around he is a rather pleasant fellow, if not somewhat sneaky and untrustworthy. He likes telling tales, discussing about rumors and generally joking around and whenever he and Nightblade start trying to one up each other with their wild stories, it is truly a sight to behold. Oblivion is easy to get along with, but the only one who is truly close to his heart is his beloved mate Doom.