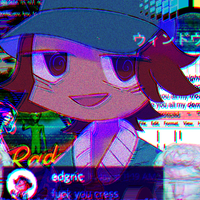 Called
Cress (by everyone)

Alter ego
Has better physical strength and capabilities but being unable to feel emotions AND relying solely on instincts.

Running is a victory
Able to run really fast.

Cress is unexeperienced when it comes to fighting. His abilities seem good on paper but are fairly underwhelming in practice. The biggest perk that he has is his speed and being able to make decisions objectively though he is unable to take others' feelings into account in his alter ego state, thus making him hesitant about using it. Lastly, Cress has a hard time concentrating in fights and easily gets distracted so he can't really use his powers at will unless he injures himself.

Cress is known for his strange hair being seemingly shorter than it actually is. This is because he actually braids his hair and wears it as a low bun though it's hard to see the actual bun itself because of his hair mostly covering it. He also dresses in a fairly casual manner and wears glasses for fun, not actually needing to wear any for medical reasons. That being said, if the situation calls for it he will have no problem with adapting appearance-wise.

Something that's also notable about him is his speech patterns. Due to his frequent use of "hm" and stutters when nervous, most people assume that Cress is a shy person though one look at his perpetually tired looking face gives away his true colours. Cress also sings in the shower but will immediately deny it if someone brings it up.

Cress always had lived just outside of the city with his parents, always attending school in Neidenbridge city. Because he wasn't exactly used to interacting with other kids of his age when he first went to school, Cress was bullied and isolated from his peers. Despite acting like he didn't mind it, for everyone else it was clear that this worsened his social skills and self-esteem significantly. Attempts to make him befriend others failed because of him showing no interest and out of fear. Things changed however, when he met Corliss around the age of thirteen. The two of them seemed to get along just fine and became close friends. Even if Cress still avoided people in general, he had at least someone to talk to and be himself.

Until his parents passed away three years later. Corliss' family decided to take him under their wing and gave him housing though these events made Cress realise something. He started to push himself to be more outgoing and positive. Even if this failed when he was in high school, it finally seemed to work in college. For a while, everything seemed to go better for him and he enjoyed his time greatly.

And then he dropped out of college. He always struggled with academics and couldn't handle the stress that well. This time, Cress became slightly more pessimistic and blunt. Being the universe's chew toy wasn't something he exactly enjoyed, so why did he need to worry. He had no abilities at all and wasn't particularily good at anything. In the end, he found a job at a convenience store. Just as he was getting used to everything, Cress slipped on the bathroom floor and hit his head. For some strange reason his special abilities finally manifested. Most people would be overjoyed to finally have something that would make them stand out from the crowd.

Cress was indifferent about it and continued working at the store despite hating the job with his guts. Little does he know, someone is keeping an eye on him.

Cress has a lot of mixed feelings. On one hand, he just wants to explore the world and prove to everyone that he's capable of something while on the other hand he just doesn't want to get his hopes up and is afraid of change. He also struggles with impostor syndrome when he does finally accomplish something because of his Alter Ego so he rarely enjoys anything he does. That being said, Cress dislikes directing his negativity towards other people. He argues that just because he doesn't feel confident about himself, that doesn't mean that others should feel like that.

Something that he's also very much known for is his stubborn and petty nature. It's incredibly hard to change his mind and he will do everything he can to prove you wrong if Cress feels insulted. Due to his personal experiences, he can also easily detect if something is up with someone and make them feel at ease. He likes being a listening ear.