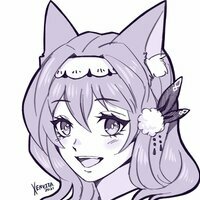 From a young age, Mandalynn wanted to make a difference in the world. Growing up on the streets she saw the worst society had to offer. It is this perspective, being raised by the streets and anyone who was willing to give her the time of day that she became blind to race and element.

Even after she became a famous idol, she still paid her less well off fans as much attention as the ones who went to her concerts. She's rather infamous within the entertainment community as the "manager slayer". If you have a bad opinion regarding race or element, she is not afraid of publicizing that knowledge and ruining you.

Naturally this kind of behavior invites rumors of her being "fake" or a "stage persona". It's very easy for her to ignore these rumors though - she's lived through worse.

Despite having such a commanding and fearless presence on the stage, she is very difficult to motivate. In that way she leans heavily on her partnered maestro to balance her out with etude. Because of just how weak she is in the willpower department, lesser maestros will feel their rhythm almost yanked from them constantly should they duet with her.

As for battle, she's no slouch either. Her fighting style is a dirty, self taught one. However, unlike Grand Master Melanie and her resonator Harley, Mandy avoids low blows and surprise attacks. Though due to the crafted and unique nature of her battle style, most opponents in competitive combat are caught off guard, especially because she fights in the same attire she wears for her idol work.

She likes fighting and singing, which is why she hasn't given up one or the other. In her own words: "Managing the stage is just like pacing yourself against a tricky opponent - both give me the same rush, and I couldn't imagine just doing one or the other."

Speaking of the stage - she goes by the stage name "Eclipse". Her songs are mostly upbeat, but carry a sad, but hopeful tone at times. She gets a lot of comments both online and in person that her music has helped many people out - which is all she can ask for.

Species Bonus: Candid Sense -Through increased hearing, the resonator has an innate sense of their target's position in battle, increasing the accuracy of their attacks.
Element Bonus: Can restore health and rhythm from any source of electricity
Class Skill: Pali di Scambio - The user can change their magnetic polarity, allowing them to stick to certain surfaces. Drains rhythm while in use.

Nube-Terra Fulmini
(Pianissimo, Piano, Forte, Fortissimo)
Advanced Lightning spell. Charges the sky with electrical energy and delivers a lightning strike from above the target. High chance to inflict numb and singeing. Fails if skies are clear

Forti Temporali
(Legato)
Lightning-Water spell that causes a severe thunderstorm, dealing occasional lightning damage as well as increasing water damage for a set period. Also has a chance to momentarily stun with minor noise from thunderclaps.

Rapsodia di miele
(Legato)
Lightning-Nature Spell, creates a sweet melody that disrupts focus as a mental debuff. Produces a sweet scent in the air as a bonus effect

Come funzionano i magneti
(Legato)
Lightning-Earth spell, pulls nearby iron to form a barrier around the user maintained by magnetism.

Vento Elettrico
(Legato)
Lightning-Solar spell, causes an EMP like effect which disables electronics nearby but also has the effect of temporarily stopping rhythm transfer for a small period.

Gli Spiriti dei Sorda
(Legato)
Lightning-Lunar attack, creates specters or spirits that deafen target resonators, either preventing commands from reaching them, or reaching them at lowered casting levels for a short period of time

Fulmine di Zeus
(Ultrissimo)
Ultimate Level lightning attack. Grants the user one unstoppable lightning bolt for them to throw. This attack cannot miss. The only way it can be blocked is by the Shield ultimate