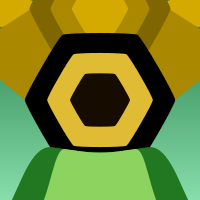 Megumi comes from an influential family within the Ah-Ooh society living in Pataend. She is Kaien's wife and co-worker, and is the resident Home Economics teacher for AHE. Most who acquaint well with her prefer to call her Ame though. She is descended from the surviving members of the Ah-Ooh tribe, whose dynasty was ended in a war centuries past. A unique genetic deviation is the reason she has golden sclera instead of her people's signature emerald green, a trait in which she and two of her three older sisters share respectively (except they have red and brown sclera each). Her favorite sub-topic of Home Economics is sewing.

Her relationship with Kaien sparks a lot of discussion across neighborhoods and even the school she teaches in, mainly due to how rare surviving Ah-Oohs are, despite a recent surge in their return. She doesn't at all mind this, all for as long as nothing tries to get in the way of their bond. Patient and motherly to students, but is more than willing to jump into action if any major harm comes to her and those she cares about.