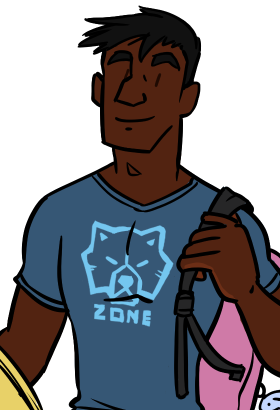 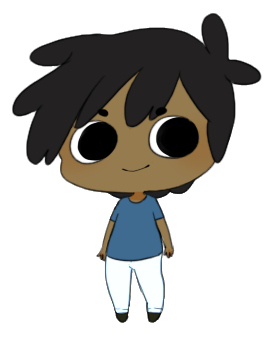 Lyle is the young jack-of-all... tasks for Brooklyn music venue The Great Mistake, if not a master of any trade. If DIY clubs had interns, you might think of him as the intern. He cleans, helps move equipment around and get bands set up, runs errands, and does miscellaneous odd jobs around the place. He's good friends with Kalyani, and together they make up the club's street team, plastering flyers around to advertise shows. If you've heard of Catband Fest, it may very well be thanks to the two of them.

Lyle isn't a man of too many words, but he's good-natured, a music lover, and eager to help out. He's big enough that he's hard to miss, but mostly he'll be in the background, hustling around getting tasks done with Silver and Carrots while other folks like the sunny and gregarious Kalyani operate as the public face of the venue. He's important, though, and it's with his help that shows go off without a hitch-- or without many hitches, maybe. Too bad for him that all the helpfulness in the world still doesn't earn his 20-year-old self any favors from the club's bartender.

Carrots is Lyle's boss, and there's always a lot to do around the venue. Carrots keeps him busy, but he likes and respects him, and he's eager to make his own mark on the industry like Carrots has.

Carrots, Lyle, and Silver are frequently working together on concert days, and they all get on well.

Lyle and Kalyani work together on tasks like the street team, and they're good friends.

Lyle doesn't interact much with Topaz, but she's friendly and he likes her.

Red is puzzling to Lyle, who's newer to the Red Experience than most, but he finds him an interesting guy with lots of experience.

Lyle doesn't much know what to make of Qiana, but he thinks she's talented, and he's impressed by the crowds that come out to see her.