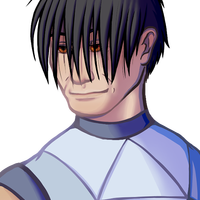 He is very confident in himself and his abilities, and for this reason he is often very clam in pretty much any given situation. His confidence is not unfounded, as he is quite skilled in his abilities to persuade others as well as out think others.

For pretty much all of his life, he always enjoyed the challenge of achieving the unattainable. He spent much of his early adult years fighting his way through the ranks to get on top of of whatever field he was in. While working his way through the management ranks of a company he worked through, he decided that the rewards of reaching the top of this company in particular wouldn't be much worth it and turned his sights to politics.

From there he worked his way up and through skill, knowledge and some manipulation he eventually found himself among the ranks of the Jura empire itself. Currently living as a member of the Jura parliament, he was well involved with not only the Jura, but with the Ertakar as well. By this point he had started to feel bored, while the work to get to where he was had been exciting things had started to become too easy, he had found himself more in love with the challenge than the goal itself.

When Jaisce first announced his hatred of the Ertakar and all Ertakar sympathizers for their past transgressions, Dameon found a new source of 'entertainment' helping Jaisce and his followers, leaving behind his place of power without hesitation. He was interested in seeing how this moment in history could affect current lives and was amused at the thought of being a part of it.