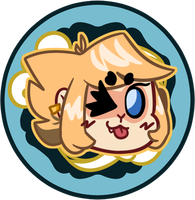 <<<<< More of her backstory can be found in Library

Back when Monkey King had defeated the Demon Bull King and disappeared, he had actually decided to stay on his island and ponder his future. (Basically he was depressed and didn't wanna deal with anymore fighting.) He ended up finding an abandoned monkey similar to himself and thought it fate to raise her as his successor. And finally give himself the chance to retire and live a life of his choosing.

As Fang grew, it became increasingly evident to her of the true nature  to the job she'd have to uptake. MKing didn't press Fang as hard as he  did in the beginning of her training, but after a while he realized if  she was to become the successor he deemed worthy, he would have to buckle down. Which is when they started becoming more distant with one another. Fang breaks down, admitting that she doesn't want to  be his successor if they're going to be like this for the rest of their  lives. Claiming that she just wanted to become someone he could be proud of. MKing claims that she doesn't need to become his successor for him to be proud of her.

In the end, Fang continues her training with her father, however at her own pace this time. Slowly as she grows, she begins to see more of the world outside via the cities nearby that which they visited sometimes. Fang claims how she'd like to travel the world one day, her father tells her it's dangerous and that he wouldn't be able to keep her safe if she did. Even so, she uses this as a means to push herself in her training, and give herself the passion needed to complete it, in hopes of seeing more of the world.

In the end she tells her father straight up that she wants to leave the island soon to travel and learn. He eventually gives in, but only if she agrees to his terms.

1. That her identity would remain a secret. He warns her that should word get out about her being his kid, it could mean big trouble for her.
2. She would have to finish her training with him, for the sake of having the strength to push on when things got rough.

She agrees, and for the next several years, works with him to strengthen herself. A part of her does wish to become his successor, for she understands his reasoning for not wanting to fight anymore after so long. She figures that by leaving on this journey that she'll be able to learn and ready herself for the trials of being his successor. And upon having completed his training on her 200th birthday, she finally takes her leave.

Unfortunately for her, she wasn't ever able to  train herself up enough to wield the staff, as MK was clearly chosen instead. She doesn't take it too personally however. She has friends, and a life that she's grown quite  fond of.

Having doted the persona of 'The Fang of the Wind' or  'Fang' for short, she travels the  world doing as she pleases. Which usually involves helping those in need, or meeting powerful spirits and  allowing herself an insight to  the past through their knowledge. Though  her father told her many  stories of his past, she wasn't told everything, and sometimes ponders her father's history without the added context.

Eventually Fang does return in the series around S2 when the White Bone Demon is attempting to collect all the ancient relic's of the past. Having received an urgent message from MKing. She is told to finish training MK, and seeing as she's never met her brother before, she takes it upon herself to do so despite unaware of the looming danger of LBD.

She's pretty arrogant on her own, but in time she slowly matures, especially when given responsibility over MK.

Comic of Fang first being found by MKing

- Left leg misc scar: Received at a young age. After mastering the art of the nimbus cloud, she snuck off into the city on her own at the first time, eventually getting lost and soon meeting Hun Ho. Who at the time was being attacked by wild dogs. After fending them off, they became sworn sisters.

- Top right puncture scar: Impaled by an arrow that was being aimed at Jun. Around the time they first met.

- Side misc scar: Slashed by the scales of a serpent while attempting to cross a lake.

- Top left misc scar: Received after attempting to take down a whole horde of demons stealing from a village.

- Right leg puncture scar: Shot by a biker gang that was attempting to cause trouble to a small town.

- Left arm burn scar: Given by Red Son during their first meet. After nearly burning Jun, Fang goes into a frenzy in an attempt to save her friend. Only to nearly take Red Son out in the process, and during their standoff he burns her arm to escape her bone crushing grip. It still haunts her till this day, the tender flesh having never fully recovered from the fight, leaving it as a weak point.

- Back misc scar: Given by a storm demon (where she got her wind glaive.) Having arrived at a village high in the mountains of the far west, Fang is told distressing news of the people who live there every harvest a demon would come down and attempt to court all the daughters who were of age, and those they deemed unworthy he would make an example out of of by turning them into clouds. Taking to the skies Fang battles the demon, and eventually manages to chop his head off, but not before he had cast a bolt of lightning onto her.

The mark itself had severely wounded her, as she'd not yet gained invulnerability. As such it had left her chakra's seriously screwed up, to the point she couldn't use her powers properly anymore. In the end both her and Jun had to search for some monks who were proficient in the use of chi.

Along the way however she did manage to stumble across an interesting individual by accident. An old woman had sold her a dream catcher to aid in her horrid nightmares, and in using it she accidentally caught a Baku. Riding it back to Master Zhou the Master of Dreams and Prophecies and in turn exchanging a few words with him. Him getting rid of her curse, but was unable to aid her with her chakra's. Claiming that is a journey of her own to sort through. And instead guided her to a temple of monks that would aid her through the passage of 7 trials.

After a few years she was eventually able to regain her sense of self and continue onward with her life as well as a new sense of understanding of chi altogether.