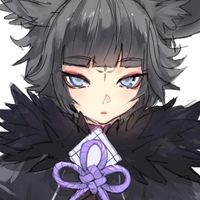 Ako comes from a wolf kemonomimi clan, known for their small statures, with its members no taller than a preteen human. She is a girl with a happy-go-lucky personality, a childish sense of humor, and a specialty in wielding the blade. Although not very experienced, she has the ability to hurt others if she needs to, but so far she has only killed animals for food and can never bring herself to hurt a human being. This led her to become somewhat cowardly when facing a battle against other people. Because of her small size, she can be easily vulnerable to anything that exceeds her agility.

Along with her older brother Kai, she is the complete opposite of him. Kai is assertive and hot-headed, as opposed to the bouncy and free-spirited Ako. Although this may seem like a conflicting relationship, they get along really well and often work together. She looks up to Kai like any other younger sibling would, as he taught her how to properly wield her blade and use the power it holds. Ako is still growing, so she has a lot to learn from her brother, the world, and most importantly herself.

Ako has light blue eyes, short and curly-spiky grey hair, dark grey ears and tail, and a dark floral tattoo on her forehead (the symbol of her clan). She prefers to wear fluffy clothes and anything with the color black, purple, or pink.

Her design is heavily inspired by my customized character from the online game Blade & Soul.