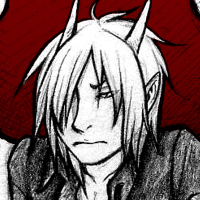 Alex has a strong, devious personality and not everyone will get along with him. He is quick to anger and doesn't mind pushing people until they break. Prior to his battle with the dog demon (read below), Alex was an aggressive demon who preyed off Edward's hatred towards others. The more hate that Edward experienced, the more violent Alex would become. Alex has possessed Edward multiple times and even caused the death of the boy's father through Edward's hands.

After the initial banishment of the dog demon, Alex became much more self-aware and became afraid of his own power. Reflecting on his mistake, he chose to permanently seal the dog by removing one of his ribs making the cage a living containment. As long as Alex is around, the dog will not be able to escape or manipulate Edward or others.

Alex now is a lot more responsible and has a strong sense of justice. Although he still has a very violent streak, he is more aware of it and often takes steps to prevent it.

Being an energy-vampire, Alex finds that sex produces the most delicious energy and so he often had sex with strangers to absorb their energy. To stay on 'good terms' with Edward, he would only do this using his own power to create a body in the physical realm rather than using that of Edward. Alex can be flirty, seductive and is very much the trickster stereotype when it comes to 'choosing his prey'.

Due to his nature, Alex has an innate distrust for religious people, especially Christians. He will gladly go out of his way to heckle at them, provoke them and generally be rude, much to Edward's dislike. 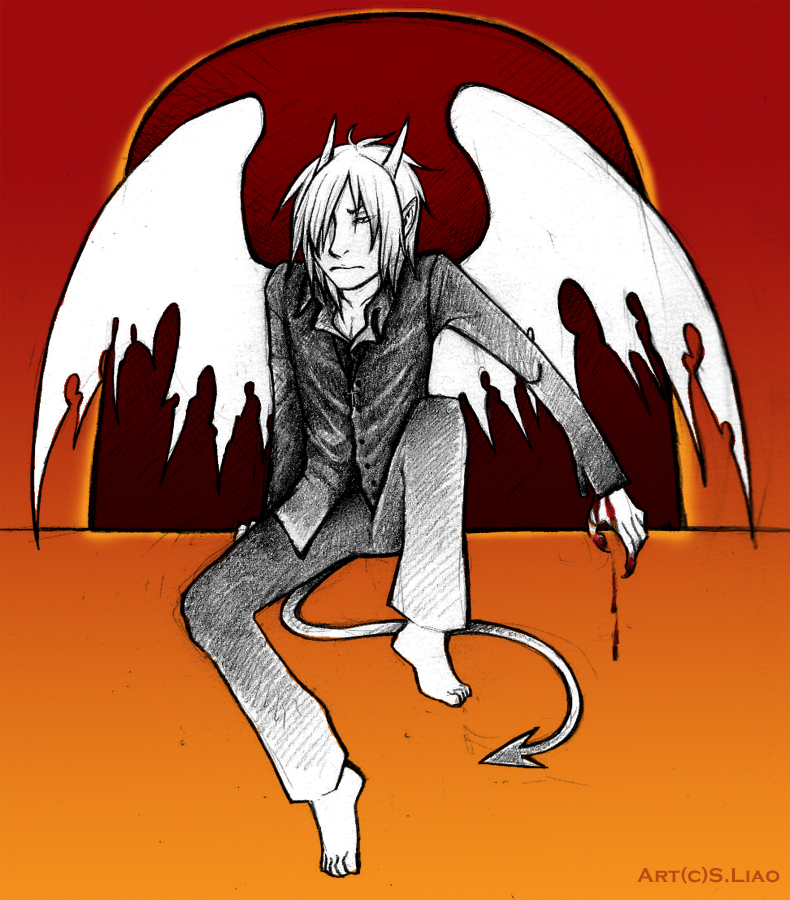 Alex appears as a slim teenager with an athletic body. His actual age is unknown, but he has chosen to keep his current form for many centuries. His hair is a pale blonde and his eyes a blood-red. He has small sharpened canine teeth. He has both skin-based wings and a forked tail, though he is sometimes seen without these. His ears are pointed and small straight red horns protrude from his head. He has two scars on his left cheek.

His clothing style is usually black shirts and trousers or black jeans. He is often seen shirtless, exposing several large scars on his torso.

Alex's true form is a creature which appears to be a mix of different animals. Most noticeably is it's dragon-like appearance but with a horse-like face.

Alex is a demon that was born from the hatred of a mentally-ill teenager named Edward. At first, he reveled in the anger and caused trouble for his host and others around them. He was violent, sadistic and has many negative actions under his belt.

As the teenager grew up, he quite literally left his demons behind. Alex found that his taunts and aggression was falling on deaf ears and there was nothing he could do to be seen. Frustrated, the demon turned in on himself, harming other demons out of pure anger.

Finding this more satisfying than he had anticipated, Alex then began to work against other demons, destroying them for his host and killing those who he could find. The largest and most dangerous of the demons was a dog-like creature whom Alex managed to subdue and bind inside a mental cage.

Alex now works as a guardian of that cage, in which he makes sure that the dog does not awaken and if it did, it does not escape.