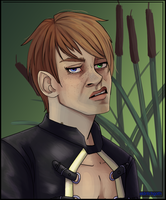 WIP
lizardfolk, mid-50s during initial journey with chryses, freyr, and ianthe
hides his lizardfolk form with a magical ring
5'10" in human form, 10' in lizard form
his ring does not hide his lizardfolk weight, so he always seems abnormally heavy in human form
rogue, uses crossbow with magic bolts and mines/bombs/grenades

in his late 20s, he was doing assassin/rescue style jobs for his home village of other lizardfolk. his last job was to rescue a kidnapped child of an important village official from a witch. he made it to the witch's home, but found no sign of either the witch or the child. so, to make the witch's life harder, he decided to blow up the home and destroy the witch's supplies.
what he didn't know was that the child was in the house after all. she was hidden by the witch's magic, unable to speak or be seen. she died in the explosion, her body being revealed.
reed returned to his village to explain the situation, but the only response he received from both village officials and his own family was "blood for blood."
there was a battle, and reed escaped. he was on the run for the next five years, never staying in one place for long, until he finally came across a ring that would mask his form and allow him to 'be human.' he spent all his savings on it, and since that day, has never taken the ring off and revealed his true form.

reed does not like to get close to people, as he doesn't trust anyone to not turn him in to his village if they were to find out the truth. he's mean, and angry, but all of his bluster is to hide a heart of gold. he loves kids, especially orphans, and wants to protect them all. soothes his need for social interaction with one night stands, remaining distant to his partners and disappearing in the morning
he also likes mystery novels (he owns two, but he'll never show them to anyone), shiny things & money (he likes to collect them), and fancy clothes (especially leather).

joins freyr and ian (who are protecting/assisting chryses) for pay but later stays with them, even when they can't pay him