“I swear to kill every necromancer I ever encounter! They took everything away from me, Selessannea! Everything! You were all I had left!

A man far older than his looks might concede, Devon has learned in time that the world is made out of suffering and death. The few women he cared about died in horrible ways. His heart one day broke, and never mended.

So Devon left care and love behind, to focus on but a single goal: to rid the world of necromancers, to him the root of all evils.

He sought out death and always found it, but what he truly sought he never managed to accept.

Turned Vampire under traumatizing circumstances he will never remember, Devon has since then struggled to retain what was left of his humanity while making the best possible use of what he calls his ‘disease’.

Befriending Sorasiehn after trying to kill her was, he would say, what kept him from sinking at the most crucial of times: being a newborn Vampire. Through her – or, rather, through caring for her – Devon managed to learn to control his power, while remembering how it feels to be Human.

Her untimely death by necromancy broke him. But instead of seeking vengeance, he returned to the Syrilae home to take care of Sorasiehn’s daughter, Nefahtil. In time, it was her daughter, Selessannea, whom he cared for – deeply, perhaps too deeply.

And when Selessannea chose a necromancer as her lover, revulsion and jealousy twisted his Vampiric instincts into violence. Yet, when he saw how deep her own affections for the necromancer ran, Devon stayed by her side. Kassandra’s birth almost claimed Selessannea’s life. Cassidy’s ended it.

Grief-stricken, Devon went into a frenzy that ended in the necromancer’s death. He then looked after Selessanea’s children for about a decade, to lose one to suicide, and the other to murder. His heart broke, irreparable.

Since then, Devon has wandered and purposefully sought out necromancers, ignoring the risks. After all, what does he have left to lose? 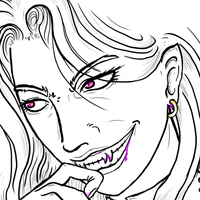 What choice did Devon have when Selessannea died and left behind two daughters? But how was he to love the hateful child of the man who caused Selessannea's death? The first person he met after being turned, Devon stuck to Sorasiehn like a lost puppy holding its own leash. She was his friend, his frustration, and his heart's end when she died.