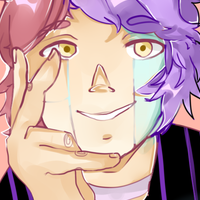 Age: programmed to be a teenager

He has short hair that's sort of ombre between orange to pink to purple.  On the middle of his forehead, he has a purple gem, purely just to look  cool. There are various blue lines across his face. His eyes are a  bright orange. He usually wears a black sweatshirt with slightly ripped  jeans.

Aleks is very curious and eager to learn new things. He's only existed  for a little while, and he is doing his best. He picks up appropriate  responses based on the people around him, so he has a fairly flexible  personality.

One of Manuelo Abad's creations. He was really just created because  Manuelo wanted to make sure that his daughter Elodia wouldn't be lonely.  However, Elodia lost interest fairly quickly. For the meantime, Aleks  just attends school as if he is a normal teenage boy.