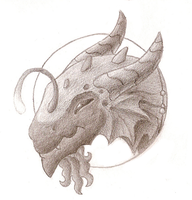 Zedass is the youngest among those of his brothers who have stayed in their birth clan after reaching adulthood. Even Zedass himself would've likely left to wander on his own, as he didn't really like living among other dragons, if it wasn't for the fact that he had always been mute. The reason for that isn't known and the male doesn't seem to particularly care about it, but his parents were worried how he would survive on his own. That's why Carran assigned a job for him: taking care of guarding the clan's territory from underwater. The job suited the young Guardian so well that after a while it became increasingly rare to see him emerge to the shore. He does what is expected of him though, and likes to do it alone - if one doesn't count his mysterious mate who no one in the clan has ever met and whose whole existence is more of a rumor than anything else.