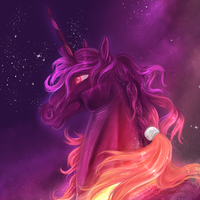 Fairly upbeat, sociable, energetic, with an idealistic view towards everything. It's definitely evident that she hasn't seen the darker sides to the world yet. She wants to do good in the world, but hasn't found her purpose/calling yet.

Despite being born with the magic that she had, she never placed much emphasis on magic. For her, while it's nice having magic and it'd be an unusual feeling to not have that magic, she doesn't particularly care much about learning more magic.

She tends to think of herself as invincible, rarely stopping to consider whether something is feasible or not, before trying that 'something' out first. Thankfully for her, she has the magic to back up her daring, and can get herself out of any fixes she finds herself in.