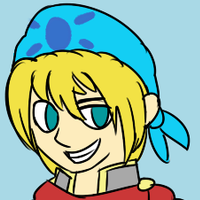 A wandering rogue from a swords & sorcery fantasy world. Felrok has a laid-back, selfish lifestyle where he mostly does things that will immediately benefit himself. This includes lying about his own accomplishments or abilities to cultivate a good image. That said, he has gone out on a limb to help his friends, so he's not entirely selfish. He has a soft spot for children. Very much the "scoundrel with a heart of gold" type.

Felrok is almost painfully heterosexual and enjoys flirting with women whenever the opportunity arises. He isn't sleazy about it and will back off when told to do so; he just clearly has a bias for the ladies and greatly enjoys their company. It makes him come off as a little desperate, but he's trying his best. Deep down he just wants someone to like him.

His talents include stealth, athletics, sleight-of-hand skills, high proficiency with knives and daggers, and sewing.

He has an intense fear of dogs and dog-like beings and does not like being around them, even if he logically knows they won't do anything to him.