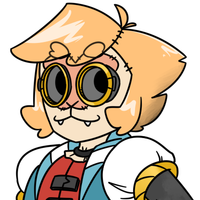 Age: A few years (Mentality of a teen)

Mannerisms: Fiddles with her jacket, sometimes holds her own tail when anxious.
Curls her tail when excited.
Fur will bristle when startled or furious.

Fang's patience can be stretched pretty  far after having dealt with her father. But despite having a lax  personality she is also quite cautious with her surroundings.
Even at times double guessing her own opinion on certain things. Which usually leads to a negative outcome in some terms.
Her empathy is usually something that makes her come across as soft. And it usually causes trouble for the others given how it's
usually  directed at others that aren't too friendly. It's only when 'evil'  snaps at one of her friends does she finally snap back.

Her fear is usually what brings out her anger.

She's very playful, and overall childish in some instances. Trickery is a  prime trait in her and is something that usually overcomes her when the  opportunity presents itself.
Still, empathy is never out of the question in her point of view.

She  believes in a way that anyone can be redeemed so long as they are   willing. Seeing them not for who they say they are, but rather how they  act.

Towards strangers she will often introduce herself  after getting an idea of who exactly they are as a person. That doesn't mean she won't help where help is needed.  Quite the contrary. She'll step in regardless of the situation so long  as she has an idea of exactly just what the situation needs.

Towards friends she's very outgoing and mischievous. While she may come off as bipolar  mix of lax and energetic, she cherishes any bonds she happens to make.  And will protect her friends to the very end. The same ideals can be   said to any family.

Towards crushes she'll often go for  appearance over appeal at first, and try to gauge an idea of who they  really are. She'll act shy and even at times show off in front of them  to get their attention.

Towards enemies  she'll attempt to  at least try to talk them down, but if it's clear that there's no other  way she'll immediately go on the offensive, especially if innocent  people / friends / family are at risk. She definitely isn't one to back  down from a fight, that's for sure.

Description: Having been trained by King. Fang know's a multitude of moves, allowing her to swiftly deal with her opponents.

Favorite Possession: Bell on her tail

Education: Taught by her father

Fang lives in 'The Oasis' an underground watershed where filtered water from the ground above leaks. At one point a soulstone had accumulated at the bottom of the large pond, and King used it to give life to Fang. From there she's lived her life with him under the safety of the underground. But she hopes to one day find others, as her father has told her there are more like them out there.