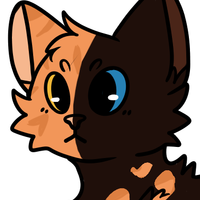 Distant thoughts become cluttered mind. What is a drop in the ocean? 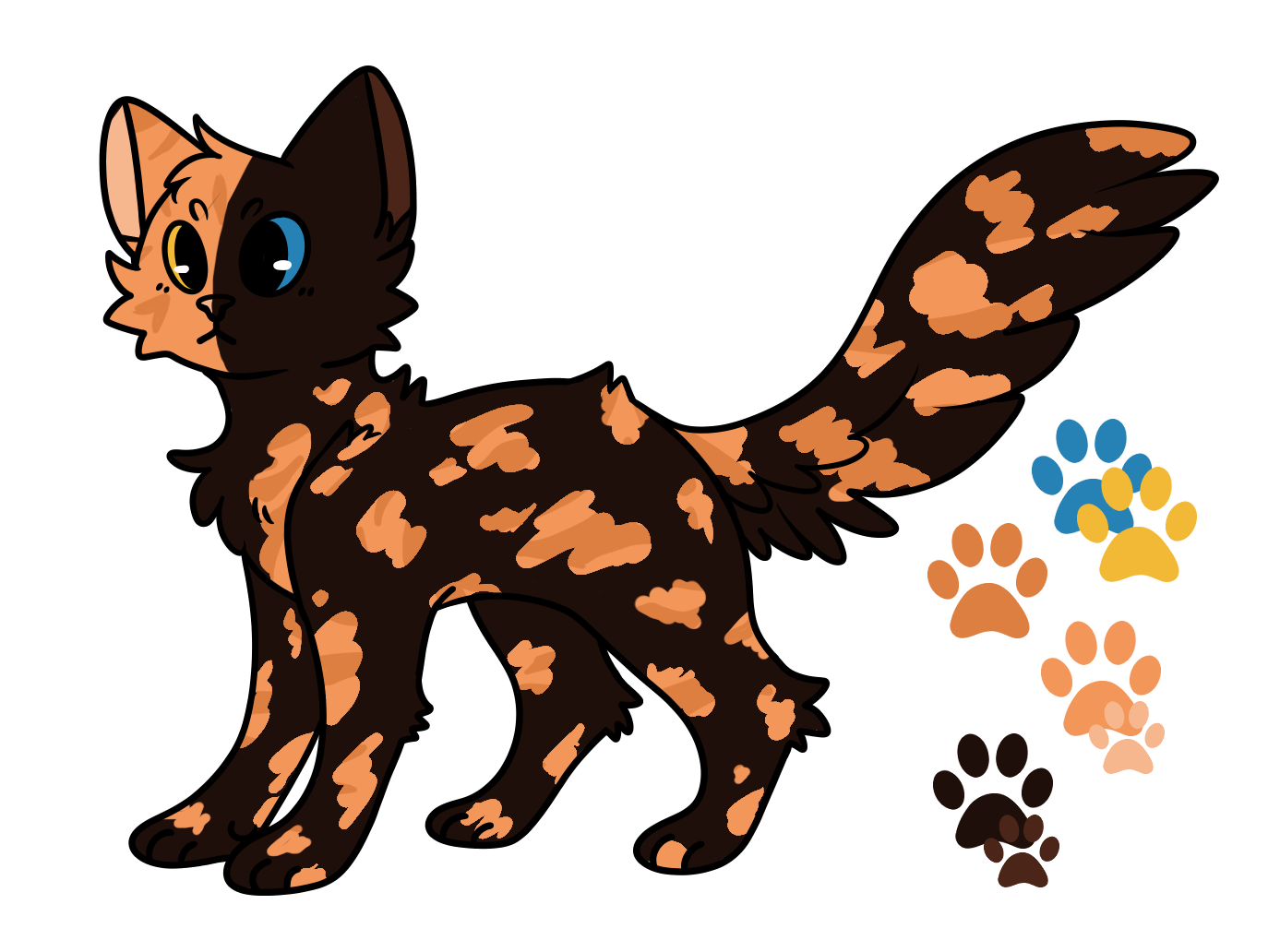 Lobstermoon has short fur, with it being a bit longer on her tail, making it fluffier. Her pelt is a tortoiseshell color, with split coloring down her face. The orange patches are medium-sized and spattered about. She has two different colored eyes, matching her split coloring. Her fur is well-kept.

Her build is nothing to note. She is not overly muscular or thin. She is not tall or short. All her features are very down the middle—average. Her only noticeable features are that of her split coloring and heterochromia. She has no accessories.

While she seems to be more of a loner type cat, Lobstermoon is friendly—at least with her Clanmates—but not close with anyone. She is loyal to her Clan and the Warrior Code, putting them before herself. When she isn't daydreaming and thinking cryptic, vague ideas about life, the universe, and everything, she likes to help her Clanmates. She has no qualms following orders, unless they begin to go against the Warrior Code.

Despite initial friendliness, she can come off as fake/artificial in her relationships, seeming disinterested in forming deep and meaningful relationships with others. She is disinterested. While she keeps up appearances as a nice cat, and she really does enjoy helping her Clan, she prefers to contemplate spirituality. Decisions she makes are impulsive, often trying to further her learning about spirituality and legends. She does not think before she acts. She also comes off as a spiritual fanatic (because she is). Lobstermoon gets very into every project she does, often to an excessive degree. She does not explain her thought processes, often jumping from point A to C without acknowledging the existence of B.

Through and through, Lobstermoon is an eccentric daydreamer. Her words are soft-spoken and gentle—as is her general attitude. She is strict about her values, such as loyalty to the Clan and Warrior Code. A talker, not a fighter. Still, she is young, and has a lot to learn about both.

Her parents named her after the chimera and calico patterning that can be found on lobsters and crayfish. Lobstermoon thinks this is strange, but who is she to judge? She was born on a new moon—she treasures this, as the new moon allows for the best view of Silverpelt.

As an apprentice, she turned to spirituality to fill the gap in her little cat heart where friends and family would be. Her parents tried to dote on her as a kit/apprentice, but she was just far more interested in literally anything else—mostly storytelling. They don't have a particularly strained relationship—more like no relationship at all. She likes her parents well enough but wouldn't say she loves them. To her, they are basically just another member of the Clan. She does not mind not being close with them, and it seems her parents don't mind either, as long as she is happy.

Lobstermoon forgoed making friends in favor of learning about spirituality and the Warrior Code. She is close with no one and does not intend to be, unless they somehow share her unrestrained dedication or will listen to her confusing ideas. Secretly she hopes someone will share her enthusiasm.

Lobstermoon prefers hunting over battle. She is much better at hunting than she is at fighting, anyway. Similarly, she has always tried to talk conflicts out (or tries to avoid them altogether).

She spent a lot of time daydreaming about legends and stories she had heard, even making her own stories in her head. She still daydreams a lot about those things. She likes to collect items that remind her of the legends. She spends a lot of her free time thinking in the forests, letting the energy fuel her thoughts.

Tried to dote on Lobstermoon. They get along well enough and have no ill-will towards each other.

Tried to dote on Lobstermoon. They get along well enough and have no ill-will towards each other.