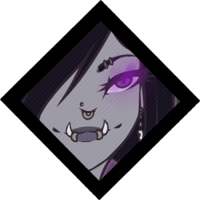 A tall & dark elf, clad in heavy leather & bearing ankle - length
scarlet curls. Her blazing felfire eyes stand out as much as her
attire. A thick sensation of Fel magic engulfs her — a corruption
deeply rooted, as evident on her body.

Pale of complexion, & covered from head to toe at all times.
Chains & leather straps line her body all around, giving loud
clinking sounds with her every move. A face built of sharp
features, always held in a scorching frown.

SKIN  / /  Her skin is ashen lavender, adorned with darker striped markings on her back. It is partially covered in leathery scales ( Her legs, arms, & lower back ) That stick tightly to her skin & are soft to the touch.

BUILD  / /  Built of soft curves & elegant features, Fierva is truly something to behold. Her demonic form is petite ; she stands approximately 143 cm ( 4 ' 7 " ) tall. Fierva's physique is shapely & exotic. She has wide hips & thighs but petite shoulders. Her lower legs are rather slim.

JEWELRY  / /  Fierva has no shortage of piercings ( Both ears & horns multiple times, left eyebrow twice, septum & nostril, lower lip twice, tongue, belly button & more. ) These are usually gold rings or studs. She also wears two golden rings around the tip of her tail. Other items for wearing given to her by her former mistress includes her magic ring & golden horn & hoof jewelry with various ruby inlays.

MENTALITY  / /  Human emotion is a complex subject for Fierva. She strongly believes she can feel & experience the same feelings any other person would, however it is uncertain whether her knowledge of compassionate emotion is just that, or if she can indeed feel them. She is incredibly intelligent, has millennia worth of knowledge under her belt, though she does not often make this obvious. Fierva prefers a more childish behavior, much suiting her curious & adventurous nature. Instead of providing others with whatever knowledge she has, she is more inclined to inquire about new topics, even appearing clueless at times.

GENERAL  / /  Despite her countless lifetimes worth of combat experience, Fierva is far from the most skilled fighter among her kin. The time where most other sayaads would train & fight by the side of a master, Fierva spent the majority of hers reading & researching instead. She is however not to be underestimated, especially not by mortals. She is swift & agile, skilled in incapitating her foe & distracting them.

MELEE SKILLS  / /  It is up close & personal with her opponent that Fierva has the best time fighting. Her weapons of choice are daggers laced with poison, but she can fight with her claws, fangs & horns if need be. She does not have a concept of honor in battle ; she can & will use trickery to take down an enemy. Not only does it entertain her to deceit, she has an impressive amount of tricks up her sleeve ; she can enter a stage of minor invisibility for a short amount of time, cast spells to charm a target & cause illusions such as duplicating her appearance or teleporting. Her magic is not perfected, of course, & all spells only last for a short amount of time. If someone is already suffering the affliction of her poison, however, the effects are enhanced.

RANGED SKILLS  / /  While not as refined as her skills in melee, Fierva can attack from afar if needed to — either to enter combat in a more offensive manner or swiftly dispose of or weakening someone. She attacks with a whip crafted from flexible leather by the sayaad herself. She will sometimes insert claws of fangs of fallen foes under the layers of it to create a barbed whip, however these tend to fall out or break after a few swipes & are therefore only used to cause a spicier opening lash.

While no one ( Including the sayaad herself. ) knows her exact age, Fierva is ancient & has served the Burning Legion for the majority of her life. Having always been drawn to knowledge, she used to trade information, tomes & the like for favors of varying kinds. She became almost addicted to gathering what knowledge she could ( especially on the subject of other, non - demonic races, their customs, history, etc. ) & spent many wars trading information & researching the different worlds that the Burning Legion had set its eyes upon. She would hoard books & scrolls in various languages to fill her collection, resulting in the construction of a private library.

When her former mate & fellow sayaad, Sarxia, supposedly died fighting in the Legion's neverending crusade, Fierva began questioning if her life, despite the intel she had amassed, was truly worthwhile. It was around that time as well, that she made her first travel through the Twisting Nether alone & began trading knowledge for personal favors around Azeroth especially. She met a warlock by the name of Barendan, whom she eventually signed a contract with. Barendan was obsessed with obtaining ancient relics from tombs around Kalimdor. Fierva therefore spent much time in Tanaris & Uldum by his side.

VIENNA CHRISTINA CHARBONNEAU.
• STATUS  / /  Business with a side of romance.

Vienna is the current mistress of Fierva. As their bond is still new,
the two are constantly trying & testing each other, trying to see
where the lines go & how far they can be pushed. There is an
undeniable tension between the two. Fierva is very defensive
of Vienna. She would no doubt lay down her own life for her.

Fierva finds Katheryn entertaining ! She likes her sassy & snarky
personality. She also likes that Katheryn takes an interest in the
same research material as she does & she is interested in sharing
more ideas & knowledge with her.

Parts of this code was made by Wicked