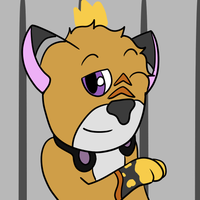 King is the leader of a fox gang that is known for leaving graffiti on their "land" This is only in the day for the most part, due to working at a convenience store at night. King has a nature swagger that gives him a cool exterior, though he has a different interior reality, being not very experienced with interactions with others outside the gang. Which is a problem due to having a crush on a vixen that works with him at the store. This results to King trying to hide his involvement with the gang and getting closer to the vixen, named Snow.