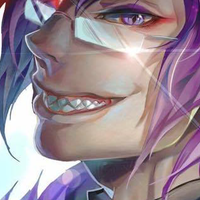 Lithe's personality can differ from world to world, but he will always be seen as a joker who places himself above all else. He is not afraid to hurt others and use them for his own gain. However, he is not completely cruel but because he does his best to avoid relationships that do not benefit him, it's something rarely seen. To those who he considers his friends, he's entertaining to have around. He's mischievous, energetic, vain and sometimes comes off as a bit nutty. Lithe travels between many worlds and may lose track of what happens in which world. To help himself from slipping up, he'll talk to himself but occasionally he'll talk about things that do not belong in his current world, or treat a certain person unusually because their relationship is different else where. Most of his friends just ignore him when Lithe does this. Sometimes he will do this on purpose if he sees an opportunity to mess with people.