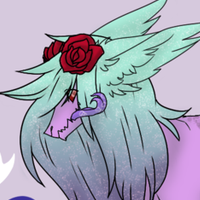 Castha is one of the flirtiest lyth but he's not really interested in other creatures, just likes to flirt with them. He's a bubbly boy who likes to hunt and play in streams, preferring to play with his prey instead of killing and eating it. He's a vegetarian, since he doesn't kill his prey, and he would like nothing more than to hang out and cuddle with someone all day. He was dropped when he was a pup, resulting in kind of a loopy behavior, but he never let that stop him, and it just helped him gain more friends. He moves around a lot because he gets bored of the same old scenery after a while, and he loves meeting new people.