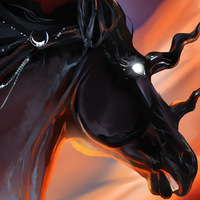 Severa is a woman of many, many things. Her mind has surpassed so many levels of sanity. This soul is dangerous, manipulative, sneaky, seductive, clingy, aggressive and even disgusting. But this soul is capable of things it had been forever believed to be incapable of, both good and bad. Testing the waters between neutral and evil, playing two parts in one role. Proceed with caution. One may never know how she will betray you or ‘love’ you.

It always starts out so simple but for some it becomes very difficult, very quickly. Your childhood births you. It is your right of passage into your mind. It’s a growth unlike any other. Severa’s unfortunately, was a severe neglect case. One of the most loving and bright mothers of all time was capable of disowning and punishing one of her own. A turning point in her mother's life and a point of direction for hers. She grew up with interests in forbidden arts, the dark witchcraft that drew her in so deeply she could not resist. Sacrificial things and the like. She was an interesting young soul to say the least. Just as odd and out of place as her mother made her to be. Except the older she got the worse her mother portrayed her as. Until they all believed Severa was a plague to this world, made of black magic and the next eradication of equine kind. Her own mother then banished her at the age of three to a black and dark portal.

She spent five years inside this empty place. The place with no sound, no air, no food, no water, no light. It was cold and brutal. Numbing yet oddly torcherous. In this time alone she developed two very different personalities. One made up of the better parts of her and another made from the more terrible parts. The witch was literally split in half and continued to slide into a very emotionally unstable place. When the portal gave way, opening and dropping her in the passage of Caeleste she began to wiggle her way back into life. Active life. Developing her more and more into who she is becoming.