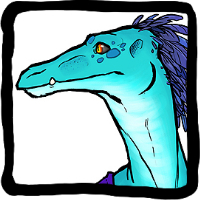 About: August is a first-generation Ssasavantki colonist, meaning his parents were born and raised on their homeworld but he was born after they were forcibly resettled to a human space colony. As such, he's pretty disconnected from Ssasavantki culture and faith and trends toward human mannerisms and ideals. A gene defect that weakens distal nerves and muscles has left him wheelchair-bound since childhood, but constant PT and medication has kept his hands and arms in more-or-less working order. He's brilliant and mechanically-minded, and has always shown a keen interest in robotics, with a special interest in assistive technologies. He works on a low-grav freighter, maintaining their engine, to fund his research and experimenting.

Recommended listening: (nothing yet)