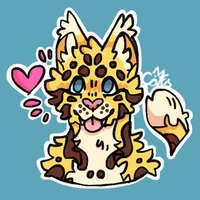 *for facial markings follow the icon image, the ref sheet is outdated :')
~

Sam is a sassy ocelot/clouded leopard hybrid who made a deal with the underworld for demonic powers.

He's a badass.
Not a 'HA I don't know danger!' kind of badass, but he isn't afraid to fight for what he thinks is right.
Though his morals sometimes are questionable, his loyalty to his friends is immense.
He's usually a very kind soul who wants the best for everyone, and he'll gladly take care of others (provided there's also some kind of benefit in it for him).

To people who aren't used to him his sarcasm can come off as rude (though usually he doesn't mean it like that).

Being the bisexual menace she is she will flirt with literally anyone she deems attractive.
She also platonically flirts with her friends.

She loves women, and likes to playfully bother Vix. She especially likes Vix's chest-fluff and curves.
They are just friends and Vix is fine with it.
(Though Sam only flirts with women when he's not male-presenting, to avoid coming off as a prick lol.)

If someone does something that he considers unacceptable and unlawful, he can choose to activate his demonic powers.
He has telekinetic powers that show as a red kind of fiery mist/plasma,
he can pick up and hold anything within that mist/plasma with relative ease.
His eyes glow white and some mist/plasma can be seen.
If he wants to he can focus some of his power to form wings made of compressed red mist/plasma.

Unrelated to the power, his sass also increases a lot - which often results in a big smirk and a lot of sarcasm.

Using his demonic power takes a lot of energy,
so after using it he will likely be exhausted (depending on the amount of power used).

Basically he made a deal with some greater underworld power:
He would get these demonic powers in exchange for handling some 'jobs'.
Occasionally his, let's say 'boss', calls him over and gives him targets to 'teach a lesson'. This can even be interdimensional.
If he were to refuse the power will just take over him and he will still do the job but without having any control.
He made that mistake a few times at the start and let's say he prefers to do it in his own less.. violent way.. ^^'

His necklace is a claw on a simple kind of thread.
If he activates his demonic powers while wearing it, the claw will be enveloped in red foggy flames and float up a bit.
Whether this necklace gives him the power is not clear.