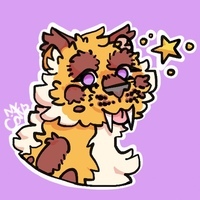 Vix is a female sabertooth tiger.

She's your typical protective mom friend, if you hurt anyone she cares about you'll be in big trouble.
Other than that she is very sweet. She will make sure her friends are doing okay and support them.
She's basically a babysitter for them sometimes.
She puts up with a lot lmao, like for example Sam's obnoxious platonic flirting.

(Actual name is Vixen but not many people call her that.)


Eyes can be purple or a darker amber.
Signature colour: Purple

She has a boyfriend who I currently don't have as a character on here yet.
He's a slightly chubby, shy, socially awkward rottweiler with a cropped tail.
She loves him dearly and gladly takes care of him. He's a bit shorter than her.
She helps him overcome his social anxiety little by little.

It would be really cool if you drew them together!!
Feel free to just interpret his design then ^^

Her boyfriend also has a dobermann brother with cropped ears and uncropped tail, which is an absolute toxic masculinity a-hole.
They were born at a horrible breeder and went through the trauma of cropping among other terrible things.
They managed to escape.
The bf's trauma expresses in social anxiety and the brother's trauma expresses in toxic masculinity.
They're both aware of it but it's tough to combat..