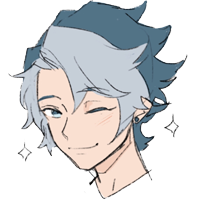 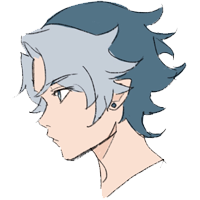 Alexander was abandoned as a baby in front of a tavern in Ken Broshna. He was found and taken in by the tavern owner, a halfling, and his human wife in a basket, along with what at first glance appeared to be a plain-looking lyre with a glittering bluish pattern and a note with only his name on it. At that time, the wife was two months pregnant and later gave birth to a boy named Killiar. Although Alexander was raised as lovingly as his brother, he always felt slightly insecure because he often had to think of his birth parents. Due to the fact that his adoptive parents ran a tavern, Alexander always grew up with a lot of hustle and bustle and started performing a lot in front of the tavern's visitors, together with his Lyra, at a young age. He began to enjoy the attention and quickly realized how easy it was for him to beguile people and wrap them around his finger with the help of his music. He later began to use this ability for smaller assignments on behalf of the Leuchtl Guild. During an assignment in Ker'isha, Alexander once again charmed his listeners around his finger, which made a devout bard named Castrovich, who was also in the audience, very uncomfortable. He made it his mission to convert Alexander and put him on the right, believing path of a bard. Meanwhile, Alexander does less for the guild, but continues to be in positive association with it. Alexander is now on his way to Thales to find out more about his origins and maybe even find his birth parents again.

Most taverns, pubs and inn owners in Ken Broshna are very sympathetic to him, as more and more visitors came to their establishments and spent their money there due to his performances. Other individual taverns in various other places in Estandra are also not averse to his performances. The halflings in Ken Broshna are also very positive about the bard. They like to celebrate parties to his music.

The devout bard Castrovich from Ker'isha, who does not get along with the ways of Alexander. Was once charmed by him and since then has taken it upon himself to convert him and lead him on the right path of a bard.

Worked for the Leuchtl guild for a short time. This often involved distracting people while the guild went about its business. The connection to the guild continues on a positive level.

• Independence. I am a free spirit and no one can tell me what or what not to do.
• I really enjoy the attention I get when I start playing music.
• I prefer to make a new friendship than a new enmity.
• My instrument is my most precious possession, I want to use it to captivate people from near and far with my music.
• It is sometimes difficult for me not to be dazzled or distracted by the beauty of someone.

• You can speak, read, and write Common and Elvish.
• You gain bonus points on Charisma and Dexterity.
• You gain proficiency on Deception.
• You have advantage on attack rolls against creatures you are grappling.

• Spellcasting: You can cast known bard spells using CHA as your spellcasting modifier. You can use a musical instrument as a spellcasting focus
• Bardic Inspiration: A creature that can hear you gains a bonus inspiration die.
• Jack of All Trade: You can add half your proficiency bonus on any ability check.
• Song of Rest: You or any friendly creature that can hear your performance regains more hit points after a short rest.


Light Crossbow
Ranged Weapon Attack: +6 to hit.
Hit: 1d8+2 piercing damage.
(80/320 ft. Reloading limits to only
one attack per round regardless of extra attacks, two-handed)