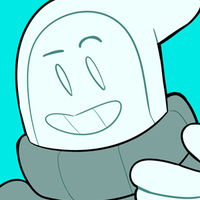 Smug ghostly being who likes to talk, like, a lot

Once upon a time at summer camp, I was snug in bed when I heard an unusual sound. Curious as always, I stepped outside the cabin and found myself in a winter version of camp, with thick blankets of snow everywhere. I was also separated from my body in this new world. As a human spirit, I took up the name C and started living at summer camp all-year-round. Or something like that.

C is a persona-adjacent character that I created in 2009. Originally appearing in Homestead Ghosts, C played the role of a somewhat snarky and devious older camper who enjoyed playing pranks on Iota and Asiago. She currently appears in Heroes of Thantopolis as an inter-act narrator, providing exposition when necessary about the comic's setting and magic.

C is a Human Spirit - a ghostly impression of my identity at 14 years old. Therefore she uses the pronouns I used at that time and identifies as female, even though I don't anymore. It was important to me to keep that part of her character intact.

Personality-wise, C is less anxious and pensive than I am, and has a bit more of an attitude. Still, nothing makes her happier than when she has the opportunity to explain something at length. C thinks of herself as an expert on certain things, and she will let you know everything she knows on a subject. Please don't try to interrupt her.

C's special power is creating illusions. She also can play the keyboard well. She often clashes with Iota over the keyboard, since Iota would really like to borrow it but C won't let him. Don't touch C's stuff!!!!!!