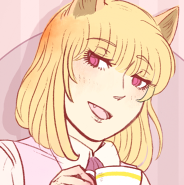 “Oh, is that so?” Henri raised his eyebrows and smiled arrogantly. “Then, by all means, go ahead! Show me which direction is the exit!”

A sophisticated young man from an old line of werewolves, Henri knows the proper etiquette of a noble like the back of his hand. As the future head of his household as well as the next leader of the area’s werewolf community, Henri has been prepared for the sometimes even heavy duties since he was a child. Though often haughty and overly competitive, Henri has a very gentle and emotional nature despite his occasional trouble understanding those around him. He’s very dutiful when he must, but likes to let himself be a little more casual and free when with his peers.

Ever since coming in contact with Nicholas and learning about the youth’s horrible home situation, the two have become close friends. Despite their only one year age difference, Henri acts as the occasional voice of reason and self conscience for Nicholas. He’s also good friends with Merrill, who for the time being is working for the Lowell family as their guard and general handyman.

He used to attend the same class as Rick and Kennith during junior high school, although changed schools before his graduation year.

Henri has a notably small and dainty appearance for a man his age: though not necessarily the shortest, he has a lean figure with distinctively small bone structure. With his long blond hair and a body shape resembling an hourglass, it’s not surprising he’s occasionally mistaken for a girl. However, Henri sees no reason to obscure his body shape with clothing, and doesn't seem to have much trouble politely correcting people if they do mistake him for a girl.

He has magenta coloured eyes with heavy eyelashes emphasized by the macara he usually wears, sharp nose and light lips with small fangs sticking out. His hair is blond and just barely reaching his shoulders, curling a little inwards from the tips. His wolf ears are very light brown - almost blond - with the innermost parts darker brown. His wolf tail is also similar in colours, with blond fur and a darker brown tail tip. He is also capable of taking a full human form where his wolf tail and ears disappear, though he prefers having his ears and tail out whenever possible.

Henri has two forms as a fully transformed werewolf depending on the time of transformation, and you can read more about them from their respective tabs.

The expectations of the future family head and a leader of the local werewolf community rest heavy on Henri's shoulders, and resulting from this he has developed a nature that is both harsh on himself and others: Henri is demanding and doesn't accept failure especially for himself, often going to great lengths to prove himself to be a worthy future leader. His self confidence is rather waxing and waning, going from bragging with his skills to strong doubts and anxiety regarding his competence and self worth. Because of this he can be a little difficult to figure out, much less approach, and in public Henri often presents a very serious image many may find intimidating. Regardless, Henri is a talented conversationalist when he just wants to be, and gets talkative especially on topics of history, politics and social studies.

Henri is thought of as confident and diplomatic, and while not perfectly in tune with people, he very genuinely wants nothing but best for others and doesn't intentionally want to hurt anyone. He is very sincere with his affection and becomes protective of those he cares about, while still respecting their need of privacy. Henri also greatly hates violence (especially due the fact werewolves are often accused of being savage brutes) and as such his first instinct is to always talk and negotiate over going on offense. However, Henri is also very competitive but simultaneously sporting an extremely sore attitude to losing. When he is talking about the things he is good at he can come across as a show-off, and his need to constantly groom himself and take care of his looks can give a vain first impression of him.

Though Henri is undoubtedly a very emotional young man, he doesn’t trust his own feelings nearly enough to make a decision solely based on them: instead he likes to take his time to make decisions, and tries his best to prioritize rational thinking and logic over his often strong feelings. Much like most werewolves, however, Henri is still strongly influenced by both his own and other people’s feelings, and trying to appeal to his emotions is often the best way to get through him. Despite the fact Henri needs his alone time, he’s still highly social and enjoys the presence of others. He’s great at superficial chatting with the members of higher society, and works well in a team even with strangers.

Spending time with Nicholas has slowly made Henri assume a more mature and responsible disposition as well: while the two still occasionally bicker and compete with one another, Henri is genuinely very worried for the youth and often acts as a voice of reason to Nicholas' ruthless, impulsive nature. In the fear of Nicholas choosing the wrong path and becoming an enemy to werewolves one day, Henri tries his hardest to help Nicholas work on their emotional issues and provide them a shoulder to lean on, even if expressing and discussing such genuine emotions can be hard for the both of them.

Born as the oldest child into a well-renowned and respected line of werewolves, Henri knew from the very beginning that he would become the next family head. As such, he was raised to fit the shoes of a leader; strictly taught how to behave and how to follow a proper etiquette, both as a human and as a werewolf. His childhood was demanding and Henri’s own temperament and somewhat poor interpersonal skills made his teaching difficult, but he learned through careful trial and error.. He didn't have many friends of his own age, however, mostly due to his position: most were afraid of getting on his wrong side and thus didn’t approach him altogether, while others wanted into his inner circles only to socially benefit from the position. Because of this, Henri nurtured his more serious and intimidating side. Sadly, while this made it harder for people with ulterior motives to approach him, it also made it hard for literally everyone else to do the same.

Henri was unexpectedly good at controlling his shifting even as a child, and this made it easier for him to socialize with humans instead of just other werewolves. Henri attended Lottenberg Academy's junior high for two years as an attempt to follow his father’s footsteps, who also attended the same school as an adolescent. Although not particularly social during this time, Henri was friends with Rick and Kennith, both of which were aware of Henri's nature as a werewolf after they found it out on their own. However, he left after two years due to finding it had to keep his werewolf nature a secret from others: his puberty made it harder for him to keep a control of his body and transformation, and full moon nights were always incredibly awkward for him.

He met Nicholas during a night where they tried to get werewolf fur for their spell. Henri almost ended up biting the youth when startled by them, making their first meeting a rather anxious and uneasy one. While walking Nicholas back to their home however, Henri learned about the youth's unfair and inhumane circumstances. After this he started making regular visits to Nicholas' place through a magically constructed trap door: he was worried for Nicholas and angry about the way their parents had treated their poor child. Though initially a little antagonistic in their interactions due to both of them being rather proud and competitive, Henri and Nicholas quickly became good friends. Eventually a time traveler called Merrill would join them, and the three would form an inseparable trio.

Currently Henri lives in his home city and spends a lot of his free time with Nicholas. Together with Merrill (who also currently serves the Lowell family as a guard and errand runner) they act as guilty conscience and sound of reason to Nicholas, whose perception of the world around them has been skewered by their isolation within their family library.