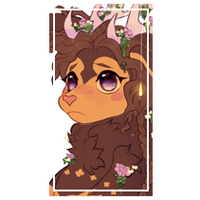 Up up high on a cliff stands a lanky figure staring down at all the busy activity in the town of Yamton. Several have reported a wandering child in the middle of the night, and others claim it to be some sort of creature assuming the form of a bloom. The first whisperings about this bloom creature all started from a tired worker trying to update his roof feeling his worn heavy body suddenly being "lifted off the ground". He could "see nothin' under his feet, almost thought he was sleep-flying until he saw a shadow of tiny hooves under his own shadow".

His neighbor retold this story to her family, and it has made the neighbor's family very famous! This is probably due to an extremely driven writer and illustrator creating an entire series of books based off this single event. Next thing you know, the character out of this writer's stories had "been wandering town" according to some real sleep-deprived adults. It had only been two months since those books were published, and now a mansion-like building belonging to the the writer has been built in the middle of town.

Meanwhile this "shadow" slowly formed into being the shadow of a bloom, then a shadow of creature, and now the shadow of a Vespire attempting to mock a baby pouflon. Of course... this may or may not have been influenced by the book series transforming the mysterious character into these things.

If one were to meet this "creature" up close (should they ever be able to catch up to such a "creature") they would find it is in fact... a baby pouflon! Only found under the shadows half in the sunlight, half under the shadow of a building, this little pouf calls herself "Paradigm". Her exceeding amount of knowledge within the first conversation anyone has with her has quite honestly led to an entire collection of verbal stories about "Paradigm".

Also known as "Paranoid", "Polaroid", "Photo", and "Painting" by those who forget her name, the few that see her wandering about say she's actually a plain genius short adult looking for work in the education field. A number of desperate school administrators have been seeking this pouf, but due to the name constantly changing, can't quite find her! If you see "WANTED: For Hire" signs scattered about all depicting an inaccurate image of this "Painting", know that this is the same "creature" common folk are chatting about every festival. - The town of Yamton was founded by a noble that felt his title wasn't "good enough" and came up with the title of "Mayor" based off his father's surname
- Future nobles became "Mayor" as their general name, making it so anyone who never seen the current ruler would assume the same previous ruler was in power; this allowed the last "Mayor" to be blamed for decisions people didn't like
- Eventually transparency was set in place, making "Mayor" just a title once more in front of a name
- There's currently an education crisis going on in this town, mainly due to teachers from the few schools around it being mysteriously "snatched up", has been going on for years
- Multiple subs have been hired from just about every career track to take the stress of teaching 50 kids or so per class off the main teachers
- The overall weight of working poufs getting sub-teaching as a part-time job has left the local adult population drowsy and tired all the time
- The mayor of the town is a sub himself, and there's no doubt complaints from parents sent to his main office and complaints from their children to his school office leaves this ol' boy exasperated
- A number of adolescents changed their life's dream to the education track as it is a guaranteed position in this place
- At the same time, the resignation rates have reached an all-time high in the teaching sector as many new teachers cave into the fear of "disappearing" if teaching for too long
- Strangely enough, there has been no reports of any subs going missing, so as you can imagine, these same ex-teachers then get themselves a secure job position as a sub
- The average school board director is probably frustrated, jaded, and not nice to any new teachers as they're "all a bunch of quitters and salary thieves!!!"-- the mayor may or may not be involved in secretly investing town funds to hire teachers outside of Yamton instead of hiring a "bunch of quitters"; if you ever wondered why the cobblestone roads are still missing stone after you sent in 34 complaints about your wagon suffering, you might wanna thank the newest "high-quality" teacher at your child's school