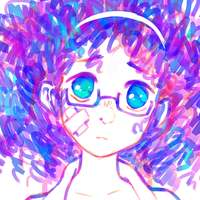 Summary: A Madoka Magica/Magia Record-style magical girl. Isolated and restless, a mishap involving her soul gem, a witch and a VCR caused her soul to be converted into an analog signal, trapped on the wrong side of the screen.

Physical appearance: Kind of gangly. Has curly, messy dark blue hair. A bit chubby. Tan skinned. Tends to dress lazily and slightly butch: flannel button-downs worn open over printed tees, whatever jean shorts or skirt are lying around at the time, and sheer tights. Her eyes are a bright cyan, same with her soul gem. Her robot body, built by her friend Grace, was modeled after an Anti-Shadow Suppression Weapon, and its head is a CRT screen.

Wish: To be seen the way she feels she is. Kyubey distorted this desire by taking it literally; self-hatred and fear thus cause this wish to backfire.

Weapon: A sling-staff hybrid. She can enchant sling ammo with various effects before hurling it, or use the staff to cast and direct electricity.

Abilities: Control over electricity. Can direct electricity in the environment, generate it herself, envelop others in it as a shield, charge weapons and ammunition with it, manifest it as ball lightning or St. Elmo's fire... etc. This makes her a good medium-to-long-range attacker. Her wish also granted her illusion magic, making it easy for her to hide her appearance from other non-magical girls (and disguise her robot form's CRT as a real human face).

Personality: A lonesome and ill-at-ease trans girl. Nervous, restive, and kind of paranoid, she tends to avoid others, though when she finds a group she vibes with, she sticks close to them.
At the start of the story, she has run away from home and tries to avoid other people who aren't magical girls. Likes retro tech, anime, and cryptids/horror creatures. Age 18 at the start of the story; 19 when she disappears.

Witch/Familiars: Perkūnas, the witch of storms. Her nature is restlessness. Has the appearance of a blackened, lightning-blasted tree. This Witch's desire to keep moving is at odds with her rooted-down body. As she builds energy to move, an electrical storm forms overhead, and the branches of the tree grow like veins to touch the growing storm and reap its energy. When the two touch, a massive electrical explosion occurs, the witch "teleports" to a new location in an instant, and little is left behind but destruction. The "core"/weak spot of this witch is in a constantly moving "knot" in the wood, with a vague humanoid shape in the center. This shape contorts and writhes, as though in pain.
Being that her body is rooted to the spot, she leaves the task of gathering victims to her familiars, the Woodcrawlers. The familiars are capable of manifesting through devices generally considered to provide information, such as TV screens, cell phones, and computer monitors, though they are more influential the bigger the screen they can infest. Once they've gained access, they begin amplifying her cognitohazardous broadcasts. Disguised as emergency alerts and other such messages, these broadcasts harm the human psyche, driving the victims to despair and either killing them or inflicting a Witch's Kiss, allowing them to be shepherded to the labyrinth. Once there, their bodies slowly become stringy red sprouts rooted to the spot, nearby her. Given time, they would grow into trees similar to Perkūnas; the witch is thus pleased with having found some people alike to her. However, the nature of her method of movement means that when she departs, the sprouts are burnt to cinders.

Doppel: Perkūnas, the Doppel of storms. Its form is a Special Tree. The master of this emotion sits in the "palm" of this tree and channels electricity through it into grounded enemies, while sniping airborne enemies with her sling. She is high in the sky, but feels safe in her isolation. Under duress, the branches of the tree curl around her, though it is unclear wherther this Doppel takes this action to protect its master or to do something more sinister. If this Doppel's master overuses its power, she may find herself surprised, transported to another world by it.

(Note: the Witch, Familiars and Doppel are described for completeness purposes (and just cuz they're cool concepts, lol), but they may not necessarily appear.)