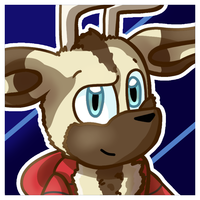 Meaning of name: I believe it came from the word "hardworking" in Algonquin, however, I need to double check. Anak is chief editor at an agency situated in the Northern Zones. He is like an older brother to his peers, being soft-spoken and supportive of his peers, although he's not afraid of throwing his weight around to get things done.

Anak knows to hear both sides of the story before emitting a judgement. He believes in doing what's right even in the face of adversity. It was his honesty and eagerness to lead by example that has earned him his position as chief editor, despite his young age. Although the majority of his peers look up to him, some are unsettled by his laid-back attitude. There are some rumours that other employees had been eying his current position and have developped a grudge against him for swipping it out of their reach. Without proof or names to investigate, Anak decided not to pay attention to it, although it sometimes makes him uncomfortable knowing that negative rumours about him are spreading.

As his coworker, Anak is very close to Humble Doe. Since she is a newer employee, he goes out of his way to make her experience at the agency extra-pleasant. Overtime, the two have become close friends, and have once have considered becoming romantic partners. However, Doe expressed her need to focus on prior commitements because considering a relationship. Anak was fully understanding of her stance and as such, the two remain close.